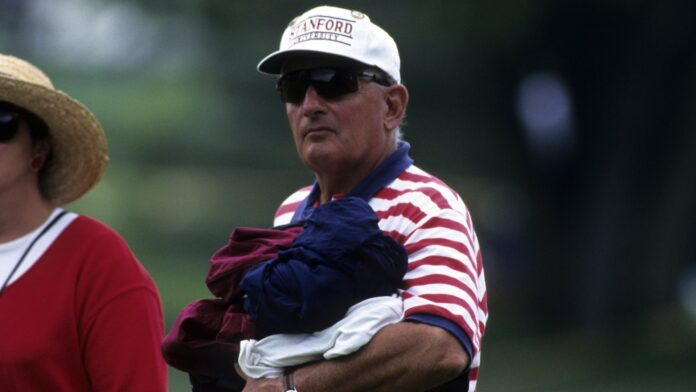 Wally Goodwin, legendary men’s golf coach at Stanford who recruited and coached Tiger Woods, died on Monday at the age of 94.

Goodwin coached the Cardinal from 1987-2000, leading Stanford to its first national championship in 41 years in 1994 and to a runner-up finish the following year. He was selected national coach of the year in 1992 and 1994, in addition to being voted into the Stanford Athletics Hall of Fame in 2018.

“Stanford Golf and the world of college athletics lost an icon,” said Stanford Director of Men’s Golf Conrad Ray, who also played for Goodwin. “Coach Goodwin had a profound impact on so many young student-athletes over the years, including myself.

“He was not only a legendary coach, but also a man of character, hard work, and total positivity which carried over to everything he was involved in.  Our sincere condolences go out to Nancy Goodwin and the entire Goodwin family.”

Goodwin is survived by his wife of more than 65 years, Nancy, their two sons and four grandchildren.

Goodwin’s coaching career spanned more than half a century, and included stints at Fountain Valley School in Colorado Springs, Colo.; Western Reserve Academy and Hudson High School in Hudson, Ohio; and the Stevenson School in Pebble Beach, where he was the athletic director and coached multiple sports, including golf. Bobby Clampett of Stevenson won a state title in 1977 under Goodwin.

In addition, Goodwin spent a season as a basketball assistant at Stetson University in DeLand, Fla., before taking the head men’s golf coach job at Northwestern, where he coached for six years until he was hired by Stanford in 1987.

Begay, who is a commentator on Golf Channel, wrote on Twitter after learning of Goodwin’s death: “Thanks coach Goodwin for giving a Native American kid from New Mexico a chance! I will forever be grateful and will miss you! Rest easy you old cowboy!! #CardinalPride #94NationalChampions.”

After Goodwin retired from coach Stanford in 2000, he was talked into starting the men’s golf program at Northern Colorado, which he led to national independent title midway through his four-season tenure.

“I had so many great moments,” Goodwin told NCGA Magazine in 2019. “I honestly don’t feel like I was the reason for our guys having good teams. I never really felt that way. I was just another coach, a lucky guy.”

Upon retiring again, Goodwin and his wife moved to Hailey, Idaho, where Goodwin lived until his death.

In 2014, Stanford renamed its annual tournament “The Goodwin” in honor of the legendary head coach. Up until that time it had been called the United States Intercollegiate.

Goodwin has been inducted into 10 different halls of fame, including the Golf Coaches Association of America’s Hall of Fame.