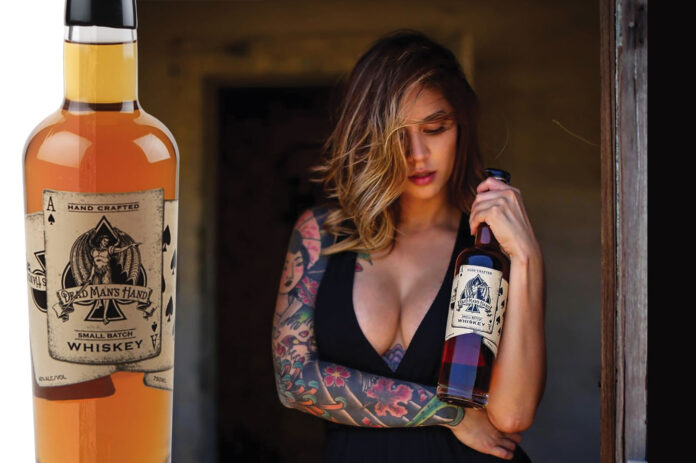 The term “Dead Man’s Hand” comes from poker. As legend has it, that’s the poker hand famed gunfighter and gambler Wild Bill Hickock was holding—two black aces and two black eights—while playing five-card draw in a saloon when he was murdered on August 2, 1876, in Deadwood, South Dakota.

Presumably, Hickock was also drinking whiskey at the time. These days, Dead Man’s Hand is a small batch of tasty whiskey that is distilled and bottled by a small but successful operation in Fairfield, Calif., owned by master distiller Brian Runkle.

“I actually started in about 2005 making wine, a Napa cab in a bottle, but we didn’t sell a ton of it,” said Runkle, who has only three employees. “So after a while, I bought a 150-gallon still, about 13 feet tall, plus some used oak barrels that were used to age wine, and we started making whiskey. We can control everything if we make the whiskey ourselves.”

“We struggled for a while with the process,” he added, “finding distributors and the rest of it. There are only the four of us, so we are all pretty busy because we all have other jobs and spend a lot of time working at night. We do everything by hand and we roll all year long. We’ve been pretty lucky because now we’ve become pretty popular, with sort of a cult following all over the world. It’s crazy.”

The whiskey is aged in toasted French oak barrels for an undisclosed amount of time, needing to be aged longer to come out at its best. The barrels bring out the delicious spiced oak, maple and caramel scents that complete a full-bodied, smooth finish to the whiskey.

Dead Man’s Hand Whiskey is hand-crafted from start to finish and comes in a collectible silk-screened bottle. The mash bill is 75 percent corn, 21 percent rye and 4 percent barley, with 40 percent alcohol by volume. It’s a classic American whiskey that’s a nice, deep oak color and smells of oak, maple and vanilla while being slightly spiced with caramel notes. The finish is smooth, slightly dry, with a hint of oak and some sweetness. It has a big, sweet corn nose with butterscotch and spice in the background, and is fat on the palate.

Dead Man’s Hand Whiskey, either 80 or 94 proof, comes in an attractive 750ML bottle and can be purchased at liquor stores and other commercial outlets throughout California, Nevada, Texas and Arizona.

Runkle is planning to add a 1-liter bottle to the Dead Man’s Hand Whiskey line by the end of the year, just in time for the holidays.

Go to www.dmhwhiskey.com to purchase your bottle of Dead Man’s Hand Whiskey.