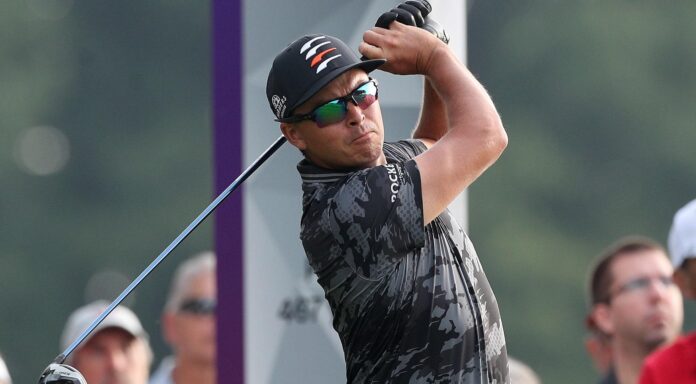 Rickie Fowler simply picked up where he left off in the final round of the 149th Open Championship at Royal St. George’s.

The 32-year-old Fowler (pictured), who has been struggling since his last victory since the 2019 Waste Management Phoenix Open, posted a bogey-free, 7-under-par 64 and is tied for the lead with Troy Merritt and Jhonattan Vegas of Venezuela after the first round of the 3M Open at TPC Twin Cities in Blaine, Minn.

“So today, I mean, going off of what we did Sunday last week, I just needed to tighten a few things up,” said Fowler, who closed with a 65 but only tied for 53rd in the Open Championship and is 124th in the FedEx Cup standings, needing to stay in the top 125 to make the playoffs.

“This golf course is fairly generous off the tee. There’s a few lakes, ponds that you just need to avoid, bit other than that, it’s go attack for the most part. So, I think we did a good job of just managing our way around since I haven’t necessarily seen the golf course a whole lot before.

“I know where I’m at (in the standings), what we need to do and stuff like that. Really, I’m just focusing on things we’ve been working on, playing more consistent good golf. More days like today and things will be fine. Kind of keep things, like I said, simple and small, focus on the day-to-day and this week and go from there. Everything will work out.”

Fowler, from Murrieta in Southern California, and Merritt played in the morning wave and finished their rounds after a rain delay of nearly 2½ hours, while conditions were more difficult when the wind picked up in the afternoon.

Play was halted by darkness with 11 players still on the course and they will return in the morning to finish round one before turning around to play the second round in the morning wave.

Vegas holed a five-foot birdie putt on the last hole to cap his bogey-free round as darkness closed in.

“I’ve seen this golf course now for about 20 years,” said Merritt, whose two PGA Tour victories came in the 2015 Quicken Loans National and the 2018 Barbasol Championship. “I came to watch the seniors play when I was in high school and got to play it once or twice.

“It’s just a lot of fun. It’s great for the players, it’s great for the fans. You can make a lot of birdies, the scoring’s usually really low. So if you like shootouts, this is the golf course for you and you’re going to get another one this week.

“I just played solid all day. Hit a lot of fairways, lot of greens, had a lot of good looks, a couple two-putt birdies on the back side. That’s what you’ve got to do around this place, to make a lot of birdies.”

Scott Stallings held the lead at 8-under until hitting is approach shot into the water on the last hole en route to a double-bogey 6 to complete a 65 and is one stroke back in a tie for fourth with Adam Schenk, who had four birdies on the back nine in a bogey-free round, and Roger Sloan, who was a bogey-free 6-under through 16 holes when the end came.

Chez Reavie made a 13-foot eagle putt from the fringe on the 18th hole in a 66 and is tied for seventh with Chris Baker, who had three birdies on each nine against a single bogey, and Michael Gellerman, who was 5-under through 17 holes before hitting into the water on the last hole and did not finish in the dark.

Ninth-ranked Louis Oosthuizen of South Africa, coming off tie for third in the Open Championship, was tied for 21st at 68, 2019 3M Open champion Matthew Wolff of Agoura Hills shot 69 and was tied for 38th, second-ranked Dustin Johnson totaled 70 and was tied for 68th, and defending champion Michael Thompson was tied for 103rd at 72.

Johnson was playing without his brother and regular caddie, A.J., who tested positive for Covid-19.