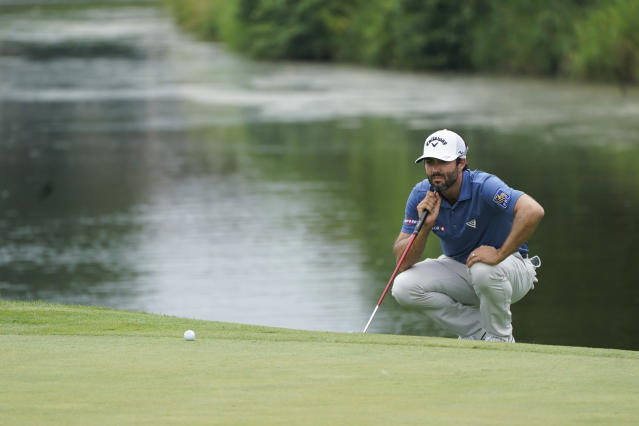 Adam Hadwin of Canada is one of the bubble boys when it comes to the FedEx Cup playoffs, but he decided to forget about that.

The 33-year-old Hadwin (pictured) carded a bogey-free, 6-under-par 65 and is tied for the lead with Ryan Armour, who also finished at 65, midway through the 3M Open at TPC Twin Cities in Blaine, Minn.

“I think the biggest thing coming in this week is that I have been a little more committed to the process instead of the outcome,” said Hadwin who is No. 120 in the FedEx Cup standings, with only the top 125 making it into the playoffs which begin next month and are capped by the Tour Championship.

“Certainly, the playoffs and maintaining my playing status have (on the PGA Tour) been creeping into my mind a little bit on the course recently, and I got away from some of the little things that make things happen in this game. But I’ve gotten back to that in my last few rounds, and it’s worked out a lot better for me. My goal is to do that for the next 36 holes, win or lose.

Hadwin, whose only PGA Tour victory came in the 2017 Valspar Championship, made three birdies on each nine and has taken only one bogey in 36 holes while recording a score of 10-under.

Armour, 45, whose only PGA Tour victory came in the 2017 Sanderson Farms Championship, made four straight birdies through No. 14 and sank a 19-foot birdie putt on the last hole to cap his own bogey-free 65.

“I can’t change much; I am who I am,” said Armour, who also has made only one bogey in 36 holes. “I’m going to try to hit fairways, I’m going to try and hit it on the green and give myself as many opportunities as I can. I can’t overpower anything out here the way some of the young kids do, so I’ve just got to go about my way, not their way.”

Jhonattan Vegas of Venezuela, who shared the first-round lead at 65, was in the lead until making a double-bogey 6 on the ninth hole while finishing a 69 and is one stroke back in a tie for third with Bo Hoag, who had six birdies in a 66, Chez Reavie, who kick-started a 67 with four birdies on the first seven holes, and Roger Sloan, who was bogey-free until the last hole in a 69.

Maverick McNealy of Stanford made three birdies while finishing a second straight 67 on the front nine and is two shots behind in a tie for fifth with Brian Stuard, who posted a bogey-free 64 that was low score of the day.

Second-ranked Dustin Johnson finished at 70-72—142 and missed the cut by two strokes.