Tringale Leads 3M Open by 1 Shot Over McNealy, Woodland After Third Round 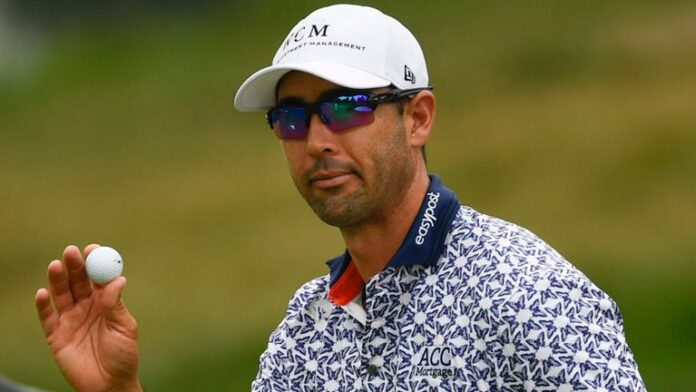 Cameron Tringale of Mission Viejo has never won an individual event on the PGA Tour, but he’s knocking on the door.

The 33-year-old Tringale sank a seven-foot par putt on the last hole to cap a bogey-free, 5-under-par 66 and will take a one-stroke lead over Maverick McNealy and Gary Woodland into the final round of the 3M Open at TPC Twin Cities in Blaine, Minn.

Tringale sank a three-foot eagle putt at No. 12 and is 5-under on that hole over three rounds.

“I had 262 into the wind to the green there and just drew a 3-wood in there,” said Tringale, who teamed with Jason Day of Australia to win the 2014 Franklin Templeton Shootout, his only victory as a pro. “The shot came out perfect and dropped right in there for a tap-in eagle. “I’ve been working hard with my putter and have made some putts this week.

“I’m happy with kind of everything, honestly. I’d say tinkering, what I want to do better tomorrow is hit my spots on the greens a little better. I don’t know where I’m at statistically, but I’ve liked just about every putt I’ve hit. Hopefully, I’ll continue to do that tomorrow.”

Tringale, who was an All-American at Georgia Tech, birdied the first two holes and added one more at No. 16 after his eagle while recording a 54-hole score of 12-under 201.

McNealy, of Portola Valley and Stanford, carded a bogey-free 67 but three-putted from 58 feet for a par at No. 18 with a chance to tie for the lead, and Woodland followed a double-bogey 6 on the first hole with five birdies on the next six holes on his way to another 67.

“It’s been a long grind and I’ve been working really hard to come back into my own,” said Woodland, the 2019 U.S. Open champion who has been battling a torn labrum in his left hip the last couple years. “I’ve been working hard with my putter and have made some putts this week.

“The hip has been a battle the last couple of years, but it’s a lot better now. It still creeps in once in a while, and I block shots out trying to protect the hip, like I did on 18 today. But I was still able to finish with a par.”

Pat Perez of San Diego, who has won three times on the PGA Tour but not since the 2017 CIMB Classic, posted a bogey-free 66 and is two shots behind in a huge tie for fourth with Cameron Champ of Sacramento (67), Jimmy Walker (68), Charl Schwartzel of South Africa (68), Chez Reavie (70), Jhonattan Vegas of Venezuela (70), Roger Sloan of Canada (70) and Ryan Armour (71).

Ninth-ranked Louis Oosthuizen of South Africa, coming off tie for third in the 149th Open Championship, is tied for 16th after a 69, while 2019 3M Open champion Matthew Wolff of Agoura Hills shot 68 and is tied for 22nd.

Defending champion Michael Thompson finished at 68 and is in a tie for 29th that includes 13th- ranked Patrick Reed, who had a 67, and first-round co-leader Rickie Fowler, who held the lead after making six birdies on the first 10 holes before taking two bogeys and a triple-bogey 8 on the last hole to complete a 70.