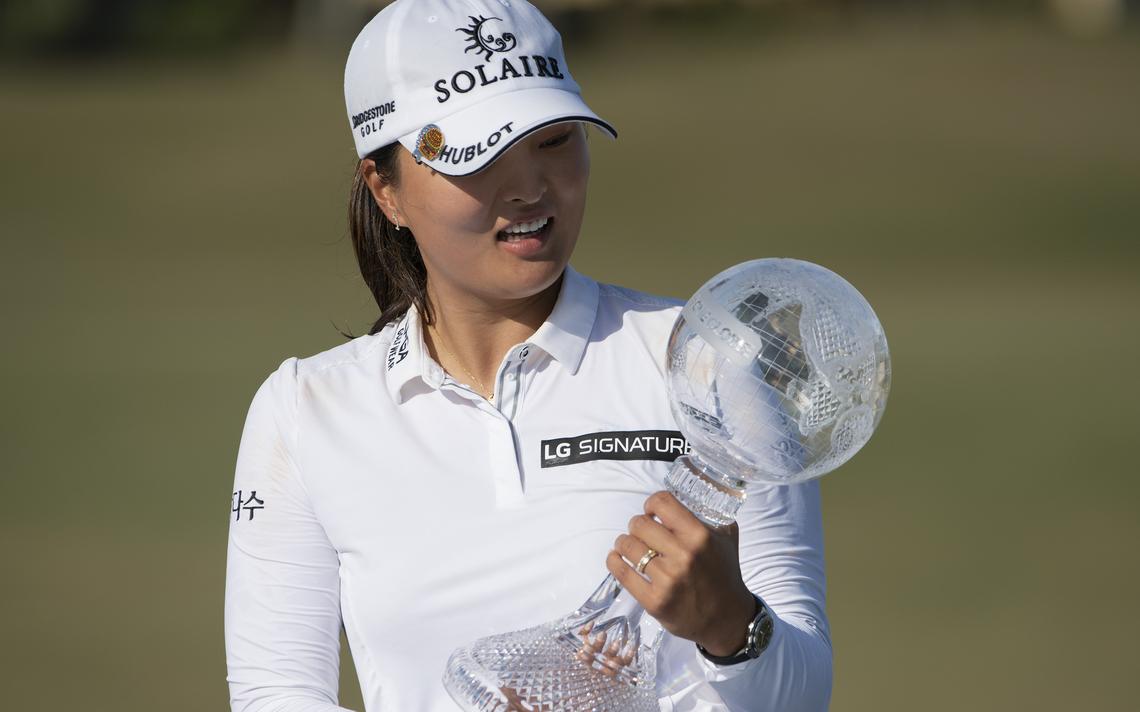 Jin Young Ko of South Korea simply showed why she is ranked No. 1 in the world.

The 25-year-old Ko pulled away on the back nine while shooting 6-under-par 66 to win the CME Group Tour Championship by five strokes over second-ranked Sei Young Kim, also of South Korea, and Hannah Green of Australia on the Gold Course at Tiburon Golf Club in Naples, Fla.

Ko also won the LPGA Tour’s 2020 money title in only four tournaments after staying home for most of the season because of the Coronavirus pandemic. She tied for 34th in the Pelican Championship upon her return, but then finished fifth in the Volunteers of America Championship before tying for second in the 75th U.S. Women’s Open last week.

“I still can’t believe it, that I’m here, that I won this tournament,” said Ko, who was the 2018 Rookie of the Year and the 2019 Player of the Year on the LPGA Tour. “When I came back to the U.S., I had a bad tournament in the Pelican Championship, but then I practiced real hard and played well after that.

“I needed to at least finish in the top three in the U.S. Open last week just to get into this tournament and it was great to finish second. I just kept playing well. I just (thought on Sunday), OK, 18 holes left and then go to home.”

Ko, who claimed her 11th LPGA Tour victory and her 18th as a pro, bounced back from her only bogey at No. 9 with birdies on five of the last seven holes to record a 72-hole score of 18-under 170.

Defending champion Kim, the 54-hole leader, closed with a 72, while Green put up a bogey-free 67 on her 24th birthday.

Mina Harigae of Monterey carded a bogey-free 68 to finish six shots back in solo fourth, while Lydia Ko, the 2014 CME winner, had a bogey-free 69 and was one more down in a tie for fifth with first-round leader Lexi Thompson, the 2018 CME champion, who wound up at 70.

Sixth-ranked Brooke Henderson of Canada birdied the last hole for a 67 to wind up eight down in a tie for seventh with Austin Ernst, who also had a 71, and Georgia Hall, who made a late double-bogey and finished at 72.

Eighth-ranked Minjee Lee of Australia tied for 13th after a 74, while fifth-ranked Nelly Korda closed with a 70 to tie for 19th and fourth-ranked Danielle Kang of Westlake Village and Pepperdine, battling a back injury, tied for 30th after a 69.

Kang won the Vare Trophy for low scoring average during the LPGA Tour season, which was limited to 18 events because of Covid-19.