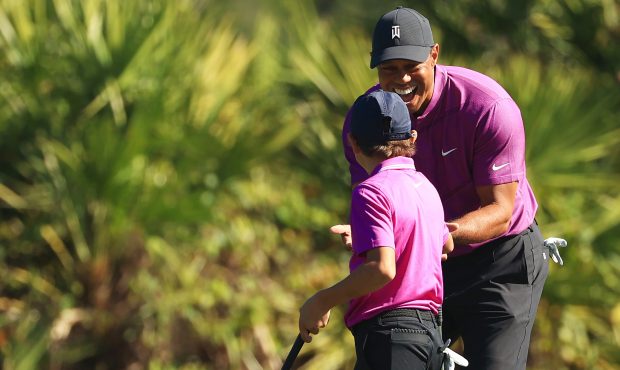 Matt Kuchar and his son, Cameron, lead the PNC Championship, but 11-year-old Charlie Woods, son of Tiger, stole the show.

The Kuchars birdied 10 of the first 11 holes en route to a 14-under-par 58 to take a two-stroke lead over Vijay Singh and his son, Cass, after the first round at the Ritz-Carlton Golf Club at Grande Lakes in Orlando, Fla.

Both rounds of the tournament are played under the scramble format.

Charlie Woods hit a brilliant approach shot to set up his tap-in eagle putt complete with a fist pump on the third hole and nearly holed out for another eagle on the 16th hole in a 62 that left Team Woods four strokes back in a tie for sixth.

“Your first eagle!” the proud papa said to his son while giving him a hug.

Tiger Woods is playing for the first time in the tournament that started out as the Father/Son Challenge in 1995, and Charlie Woods is the youngest player ever to compete in the event.

Golf stars now can compete with any family member who does not have membership on a professional tour.

“He’s just as competitive as I am,” Tiger Woods said, who sent Charlie to the driving range while he conducted post-match interviews. “He has the same competitive spirit, want to play our best and win.

“I don’t really care about my game. I’m just making sure that Charlie has the time of his life. And he’s doing that. It’s just a blast to have this opportunity with him. We had such a great time.”

Team Singh eagled the fifth hole and added 10 birdies in their 60, while Greg Norman and Greg Jr. eagled the third hole in a 61 that left them in a tie for third with Tom Lehman and his son, Sean, plus David Duval and is son, Brady, who added another eagle on the fifth.

Team Woods, after their 62 are tied for sixth with Justin Thomas and his father, Mike; Mark O’Meara and his son, Shaun; Lee Trevino and his son, Daniel; Jim Furyk and his son, Tanner, and John Daly and his son, Little John.

Bernhard Langer, who has won the title four times with his sons, Jason and Stefan, including last year with Jason, is tied for 12th with his daughter, Jackie Langer John, at 63.