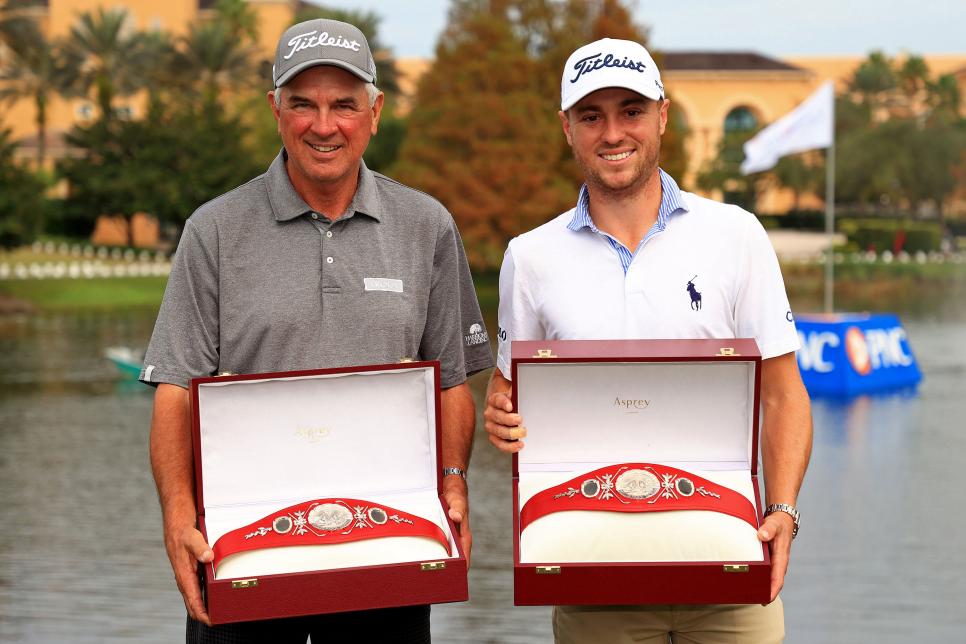 Team Thomas shot 15-under-par 57 to beat Vijay Singh of Fiji and his son, Cass, by one stroke in the PNC Championship at the Ritz-Carlton Golf Club at Grande Lakes in Orlando, Fla.

Both rounds of the tournament are played under the scramble format.

“This is a fitting way to end a very bizarre year,” said Justin Thomas, who won twice on the PGA Tour in 2020, year of the Coronavirus pandemic. “I was just thinking about that, and this is really special.

“I can see why so many guys plays in this tournament every year with members of their families. This is the highlight of the year. We had so much fun.”

Said Mike Thomas, who is a PGA teaching pro: “I was very nervous yesterday, because I don’t usually do this. But for some reason, I was really relaxed today and it was very enjoyable. It was a special couple of days.”

Team Singh, which finished second for the third time in the tournament that dates to 1995, birdied nine straight holes through No. 10 while posting a second 60, while Mark O’Meara and his son, Shaun, and Lee Trevino and his son, Daniel, both had 59s to wind up two strokes behind in a tie for third.

First-round leaders Matt Kuchar and his son Cameron, finished at 64 and were three down in a tie for fifth with Tom Kite and his son David, who wound up at 58, while Tiger Woods and his 11-year-old son, Charlie, were five back seventh after a second 62, followed by John Daly and his son Little John, who were six back after a 63.

Jim Furyk and his son, Tanner, posted a 64 and were one more behind in a tie for ninth with Greg Norman of Australia and his son, Greg Jr., and Tom Lehman and his son, Sean, who both closed with 65.

Bernhard Langer of Germany, who has won the title four times with his sons, Jason and Stefan, including last year with Jason, finished in a tie for 12th with his daughter, Jackie Langer John, following a 64.