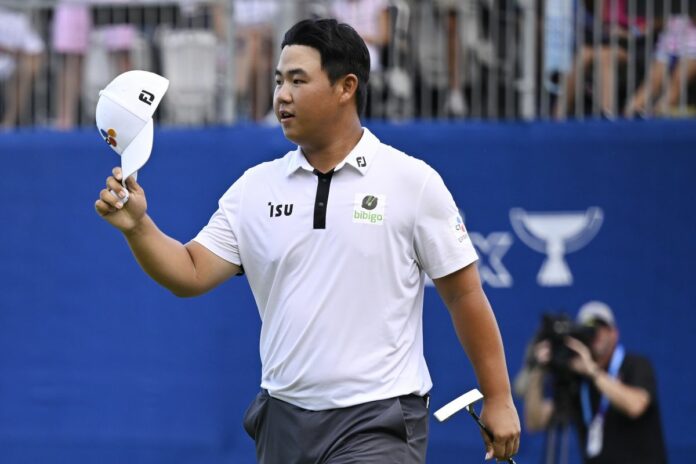 The 20-year-old Kim, who made a quadruple bogey on his first hole of the tournament, closed with a 9-under-par 61 to beat John Huh of Los Angeles and Cal State Northridge and fellow South Korean Sungjae Im by five strokes in the 83rd Wyndham Championship at Sedgefield Country Club in Greensboro, N.C.

By winning the regular-season finale, Kim earned his PGA Tour card and a spot in the FedEx St. Jude Championship that opens the FedEx Cup playoffs on Thursday at TPC Southwind in Memphis, Tenn.

Kim became the second-youngest winner on the PGA Tour since World War II, with Jordan Spieth the youngest at 19 when he captured the 2013 John Deere Classic.

“I just can’t believe it and I’m almost speechless right now,” said Kim, who has won nine times on pro tours in Asia and goes by the nickname of Tom. “I’ve worked so hard to get to this point and walking off the 18th green, I had a hard time believing it was true. I have to thank my family and my team, everybody who helped me so much to reach this point in my career.

“No matter how it looked, it was hard out there today and I never knew golf was this stressful. It’s amazing to be here as a winner after making a quad on my first hole this week. I just laughed it off because I knew I had 71 holes to go, just stayed relaxed and kept my patience.

“This is definitely a week I will always remember.”

Kim, who finished third in the Genesis Scottish Open last month and was seventh in the Rocket Mortgage Classic last week, sank a seven-foot eagle putt on the fifth hole and had five of his seven birdies while shooting 27 on the front nine, made his lone bogey at No. 10 and recorded a winning score of 20-under 260.

Im, who earned his second PGA Tour victory in the Shriners Children’s Open earlier this season and shared the third-round lead, holed his third shot from 108 yards for an eagle on the fifth hole and had four birdies and four bogeys in a 68, while Huh, whose only PGA Tour victory came in the 2012 Mayakoba Golf Classic, sank a 11-foot eagle putt at No. 5 in a 67.

Rookie Ben Griffin collected five birdies on the back nine in a 64 to finish six shots back in solo fourth, while Max McGreevy had six birdies on the last 10 holes for a 65 and was one more down in a tie for fifth with Russell Henley, who birdied four of the first 10 holes en route to a 66, and Taylor Moore, who birdied four of the first six holes on his way to a 67.

Tyrrell Hatton of England sank a three-foot eagle putt at No. 5 in a 64 and wound up nine strokes behind in a tie for seventh with Chesson Hadley, who birdied the last three holes of the front nine in another 64, Cameron Percy of Australia, who birdied four of the first five holes in a 66, Anirban Lahiri of India, who shot a second straight 68, and Brandon Wu of Danville and Stanford, who was tied for the 54-hole lead with Im but could manage only a closing 70.

Will Zalatoris, the 2020-21 PGA Tour Rookie of the Year, tied for 28th after a 68, while two-time major champion Zach Johnson made two birdies on the back nine in a bogey-free 68 and tied for 36th.

Rickie Fowler of Murrieta shot 71-69—140 to miss the cut by one stroke, but landed the 125th spot in the FedEx Cup standings and was the final player to qualify for the playoffs.