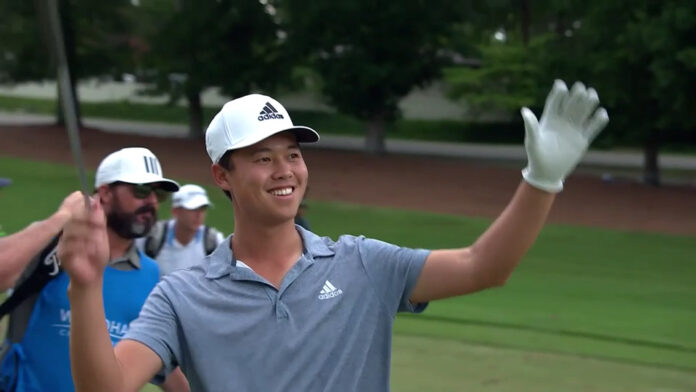 Rookie Brandon Wu provided a shot to remember right before golf was halted for the day.

The 25-year-old Wu (pictured), from Danville and Stanford, holed his second shot from 147 yards for an eagle in the 11th hole right before the horn sounded to end play and was tied for the lead with Sungjae Im of South Korea in the third round of the 83rd Wyndham Championship at Sedgefield Country Club in Wilmington, N.C., where play was stopped twice because of thunderstorms.

Only 11 players finished the third round and the rest of the field will return early Sunday morning to complete that round and tournament officials claim the event will be finished by the end of the day without any further delays.

This is the final event of the PGA Tour regular season and several golfers are scrambling to climb into the top 125 in the FedEx Cup standings, or stay there, to qualify for the FedEx St. Jude Championship that will open the playoffs next week at TPC Southwind in Memphis, Tenn.

“That was a little crazy,” said Wu, who has tied for second in the Mexico Open at Vidanta, tied for third in the Puerto Rico Open and tied for sixth in the Genesis Scottish Open this season. “We heard the thunder and thought the horn might blow at nay time, but I hit the shot and knew it was good even before it went in, and then I heard the horn. It was amazing, like a basketball player hitting a long shot at the buzzer.

“I missed the cut in nine of my first 10 starts this season before I started playing well in the second half of the year. I just have to stay focused and I feel I can be in contention, the way I am now. I just have to keep playing my game and I believe the results will come.”

Wu, who captured the Korn Ferry Tour Championship last year for his first pro victory, opened the Wyndham with scores of 64-67, but made a bogey on the second hole in round three before carding birdies at Nos. 7 and 10 ahead of his eagle to reach 12-under-par.

Im, who claimed his second PGA Tour victory in the Shriners Children’s Open earlier this season and started the Wyndham with scores of 63-69, had three birdies on the front nine and another on the 11th hole to also finish the day at 12-under.

John Huh of Los Angeles and Cal State Northridge, the first-round leader at 61, birdied his last two holes and was 3-under for the day and one stroke back in a tie for third with Joohyung Kim, 20, of South Korea, one of the second-round co-leaders, who was a bogey-free 2-under after 10 holes in round three.

Kiradech Aphibarnrat of Thailand, one of the few player to finish the round, shot a bogey-free 63 that included three late birdies and is two shots back in a tie for fifth with Davis Riley, Brian Stuard and Anirban Lahari of India, who were all 3-under for the day after 10 holes and 10-under for the tournament, plus Russell Henley, who was 2-under through 11 holes, and 2009 Wyndham champion Ryan Moore, who was 1-under through 10.

Will Zalatoris, the 2021 PGA Tour Rookie of the Year, carded a second straight 66 and was in a tie for 15th at 7-under, while two-time major champion Zach Johnson was 1-under for the round through 13 holes and 6-under for the tournament in a tie for 23rd.

Joseph Bramlett of Saratoga and Stanford made a hole in one from 182 yards on the 16th hole and was even-par for the day through 10 holes and in a tie for 74th.