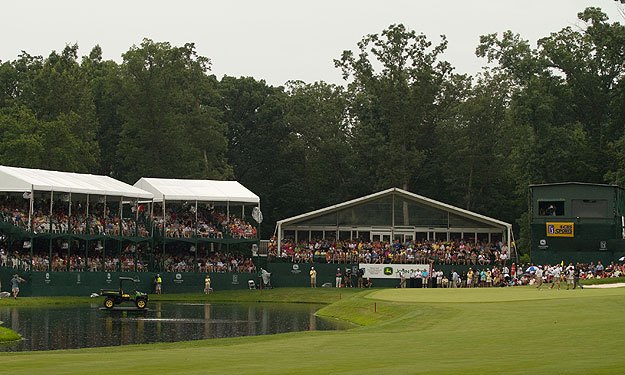 The John Deere Classic is in an unenviable spot on the PGA Tour schedule, a week before the Open Championship, and every year it loses countless top players who head to the United Kingdom early ahead of the third major of the season.

Tournament officials have done everything they can to entice players to stay and play, going so far as to charter a jet to fly those who do compete to the U.K. on Sunday night after play is complete at TPC Deere Run in Silvis, Ill.

So it was a particularly cruel blow when two-time John Deere champion Jordan Spieth announced last week that he would skip the tournament to get a head start on his links preparation for Royal Birkdale in Southport, England, site of the 146th Open next week.

“I love the tournament, I love the golf course and, more importantly, I love the people,” the third-ranked Spieth said of the John Deere Classic. “While my schedule doesn’t permit me returning to the Quad Cities this year, I plan to be back in the future.”

John Deere officials were gracious enough to post this message on Twitter: “We will miss you next week @JordanSpieth — Good luck at The Open!”

Spieth, who won the tournament in 2013 and 2015, didn’t defend his title last year, when he was expected to represent the United States in the Olympic Games in Rio de Janeiro.

However, he decided not to go Rio because of fears over the Zika virus, yet he still skipped the John Deere Classic, saying it would be “inappropriate” after declining to play for the U.S. team.

Spieth kick-started his PGA Tour career as a rookie in the 2013 John Deere when he chipped in for a birdie on the 72nd hole to get into a playoff. He then defeated Zach Johnson and Canada’s David Hearn with a par on the fifth playoff hole.

The 19-year-old played the last three rounds in 65-65-65 and became the first teenager to win on the circuit since Ralph Guldahl captured the 1931 Santa Monica Open.

The win earned Spieth a spot on the U.S. team for the President’s Cup and a berth in his first major, the Open Championship, a few days later at Muirfield. After a scramble to get his passport, he opened with a 67 but ran out of gas and eventually tied for 40th.

Two years later at TPC Deere Run, Spieth beat Tom Gillis with a par on the second extra hole, and the following week he tied for fourth in the Open on the Old Course at St. Andrews, missing by one stroke the playoff in which Zach Johnson beat South Africa’s Louis Oosthuizen and Australia’s Marc Leishman.

So, even though two of Spieth’s 10 PGA Tour victories have come at TPC Deere Run, but it wasn’t enough to get him there this week.

However, the show will go on, as it has since future PGA Tour commissioner Deane Beman won what started out as the Quad Cities Open in 1971, then repeated his title the next year.

“The John Deere Classic is thrilled to have the mix of elite veteran and young players coming to TPC Deere Run to compete on a great golf course in front of our tremendous fans,” tournament director Clair Peterson said.

“We know our fans are going to be thrilled to get an opportunity to see them play again at Deere Run.”

Unsaid is that it would have made a huge difference if Spieth were on the list.