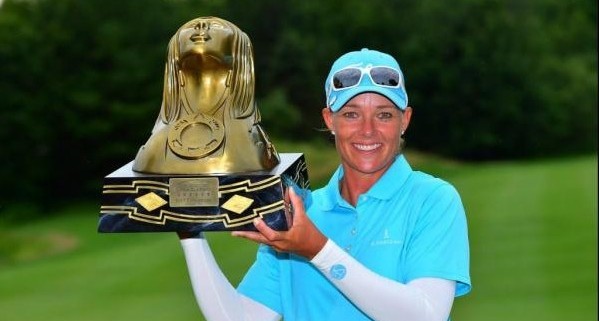 Katherine Kirk of Australia sank a 10-foot birdie putt on the final hole to beat Ashleigh Buhai of South Africa by one stroke and capture the inaugural Thornberry Creek LPGA Classic at Thornberry Creek Golf Club in Oneida, Was.

Kirk, who was an All-American at Pepperdine, closed with a 2-under-par 66 to claim her 11th pro victory, but the first since the 2011 Mount Broughton Classic on the Australian Ladies Professional Golf Tour.

“To make that putt (on 18) was huge,” said the 35-year-old Kirk, who went 152 LPGA Tour events without winning since the 2010 Navistar LPGA Classic. “All wins are good. Winning out here is hard, and it’s gotten a lot harder out here since I first did it, that’s for sure.

“There is so much talent out here now and it makes it so much harder to win. I think I’m the 15th-oldest player on Tour, so if you’re looking at age it’s more in favor of the younger generation these days, but hard work pays off.

“I’m grateful for the opportunity to still be playing, and I still love it.”

Buhai, who has won four times as a pro, recorded her best result on the LPGA Tour with a bogey-free 67, while Sei Young Kim of South Korea was two shots back in third after a 63, Pornanong Phatlum of Thailand was another stroke back in fourth after a blistering 62 and Cristie Kerr was four down in fifth following a 66.

Tiffany Joh of San Diego and UCLA shot 67 to wind up five shots behind in a tie for sixth with Ayako Uehara of Japan, who had a 68, while rookie Mariah Stackhouse from Stanford carded a 67 and was another stroke down in a tie for eighth with Georgia Hall of England, who totaled 66, and Megan Khang, who came in at 68.