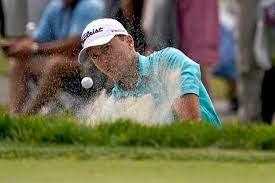 Russell Henley is right where he’s been after each of the first three days in the 121st U.S. Open, on top of the leaderboard.

The 32-year-old Henley (pictured), who has been tied for the lead after each round, sank a 10-foot par putt on the final hole to cap an even-par 71 and is tied for the lead with Louis Oosthuizen of South Africa and Mackenzie Hughes of Canada heading to the final round on the South Course at Torrey Pines in La Jolla.

“I hit the ball a little better on the front nine, but on the back nine even when I was out of position, I was usually able to make par,” said Henley, whose best finish in a major was tie for 11th in the 2017 Masters. “It was nice to make par on the last hole and I’ll sleep on that one.

“I feel good about my game and I have to just keep doing what I have been doing and keep competing. Every shot is important, and of course I’m a little nervous but I’m just trying to stay calm and commit to what I’m doing. I’m just happy I have a chance to win tomorrow.”

Henley, who has won three times on the PGA Tour, stayed in the lead with three birdies on the front nine and one more coming home, holing a bunker shot at No. 11, to finish 54 holes at 5-under 208.

Oosthuizen, who won the 2010 Open Championship at St. Andrews, sank a 52-foot eagle putt on the last hole to shoot 70, while Hughes eagled the 13th hole and birdied the last for a 68.

“I just wanted it to slow down,” Oosthuizen said of his monster putt on the final hole. “I had a good line and I guess it was a good speed, because it went in. I made a few good putts today.

“I made some mental errors today and short-sided myself a few times, but was able to shoot a good score. This is a tough, old-fashioned golf course, but you just have to handle your nerves and focus on what you have to do.”

Said Hughes: “I love this golf course and play here in the Farmers every year. It’s a lot like playing it early in the year, except now it’s a little firmer, but I’m comfortable playing around here. I love playing here and have had that feeling this week. I’m just having a blast and looking forward to tomorrow.”

Fifth-ranked Bryson DeChambeau of Clovis, the defending champion, carded a bogey-free 68 and is two strokes back in a tie for fourth with Rory McIlroy of Northern Ireland, the 2011 U.S. Open champion, whose 67 equaled the low score of the day.

“This is the most mentally challenging tournament in golf,” said the 11th-ranked McIlroy, a four-time major champion. “I made some good shots and some good putts, especially on the last few holes, to keep myself in it.”

Third-ranked Jon Rahm of Spain shot 72 and one more shot back in a tie for sixth with Matthew Wolff of Agoura Hills, who had a 73, and Scottie Scheffler, who finished at 70.

Top-ranked Dustin Johnson, the 2016 U.S. Open champion, totaled 68 and is four down in a tie for ninth with fourth-ranked Collin Morikawa of La Canada Flintridge and Cal, the 2020 PGA champion, who wound up at 70, sixth-ranked Xander Schauffele of La Jolla and San Diego State, who finished at 72, Christiaan Bezuidenhout of South Africa, who came in at 70, and Kevin Streelman, who had a 72.

Second-ranked Justin Thomas and 10th-ranked Brooks Koepka, a two-time U.S. Open champion, both shot 71 and are in a tie for 14th, while seventh-ranked Patrick Cantlay of Los Alamitos and UCLA totaled 71 and is tied for 31st, and eight-ranked Patrick Reed is tied for 54th after a 74.

Phil Mickelson, who needs to win the U.S. Open to complete the Career Grand Slam, struggled to a 76 and is tied for 63rd.

Richard Bland, the 48-year-old from England who was tied for the 36-hole lead with Henley, failed to make a birdie as he stumbled to a 77 and is tied for 21st.