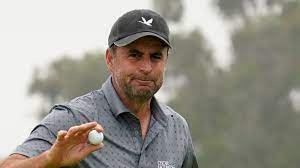 Richard Bland of England is 48 years old, claimed his first victory on the European Tour last month and suddenly is atop the leaderboard in the 121st U.S. Open.

Bland (pictured), who has won only twice as a pro, shot 4-under-par 67 and is tied for the lead with first-round leader Russell Henley after two rounds on the South Course at Torrey Pines Golf Course in La Jolla.

“To be leading in major, the U.S. Open, I’m just over the moon,” said Bland, who won the Betfred British Masters in a playoff last month and also won the 2001 Challenge Tour Grand Final. “I’m very proud. To lead a major is always pretty special. I tied the lead in the Open in 2017 for a hole, so it’s nice to have it a bit longer than that.

“I was coming here off a couple of good results, a win and a third in Europe. I’ve been driving the ball well for five or six weeks now, which is the cornerstone if you’re going to put up a fight for the U.S. Open.

“When I saw this place on Monday, it kind of set up to my eye and I got some tips from Lee Westwood and Justin Rose. It’s all there just straight in front of me, and that’s the kind of golf course I like. … If you just keep putting the ball in play, then you’re going to give yourself a chance.”

Bland started on the back nine, where he collected four of his seven birdies, which were mixed in with three bogeys as he recorded a 36-hole total of 5-under 137.

Henley made his second birdie on the eighth hole to take sole possession of the lead while finishing on the front nine, but then made his lone bogey in a 70 on his final hole to drop back into a tie for the lead.

“To make a bogey on the last hole was a little disappointing, but I’m happy with the way I’m playing,” said Henley, who has won three times on the PGA Tour but whose best finish was a tie for 11th in the 2017 Masters. “I feel good about my game and I just want to stay patient and give myself good chances.

“I’m still figuring out how to play in the majors and want to keep myself on the right side of the hole. The course is playing a little firmer and every shot is important. I didn’t get myself into trouble and kept giving myself some good looks. I have to keep doing that on the weekend.”

Matthew Wolff of Agoura Hills bounced back from an early bogey with four birdies to post a 68 and is one stroke back in a tie for third with Louis Oosthuizen of South Africa, who won the 2010 Open Championship at St. Andrews and birdied the last hole for a 71.

Two-time Masters champion Bubba Watson birdied five of the last six holes for a 67 and is two shots behind in a tie for fifth with third-ranked Jon Rahm of Spain, who birdied the last hole for a 70.

Sixth-ranked Xander Schauffele of La Jolla and San Diego State had three birdies and three bogeys in a 71 and is one more down in a tie for seventh with Mackenzie Hughes of Canada, who birdied his first three holes en route to a 67, and Kevin Streelman, who birdied four holes on the back nine in a 69.

Patrick Rodgers of Stanford made two late birdies in a 71 and is four strokes back in a tie for 10th with Scottie Scheffler, who birdied two of the last four holes for a 69, and Guido Migliozzi of Italy, who finished at 70.

Fifth-ranked Bryson DeChambeau, the defending champion, finished his 69 with a birdie and is in a tie for 13th that includes second-ranked Justin Thomas, who also had a 69, fourth-ranked Collin Morikawa of La Canada Flintridge and Cal, who wound up at 67, and 10th-ranked Brooks Koepka, a two-time U.S. Open champion, who struggled to a 73.

Top-ranked Dustin Johnson shot 73 and is in a tie for 30th that includes Phil Mickelson, who totaled 69 and needs to win the U.S. Open to complete the Career Grand Slam, while

Ninth-ranked Tyrell Hatton of England finished at 70-78—148 and missed the cut by four strokes.