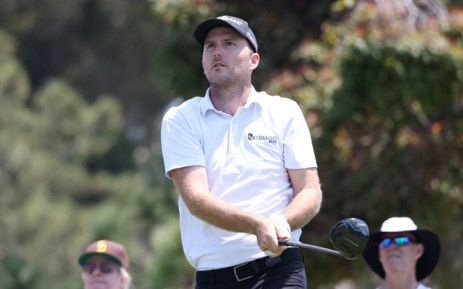 Russell Henley might have finally figured out how to play in the majors.

The 32-year-old Henley (pictured) carded a 4-under-par 67 and was tied for the lead with Louis Oosthuizen of South Africa when darkness halted play in the first round of the 121st U.S. Open on the South Course at Torrey Pines in La Jolla.

There was a 90-minute fog delay before the first shot was hit in the opening round, so 40 players did not finish and will return on Friday morning to complete round one before the second round begins.

“I’m still trying to figure it out,” said Henley, whose best finish in 26 major tournaments was a tie for 11th in the 2017 Masters. “I haven’t exactly played great, consistently in the majors, or in U.S. Opens and contending or anything. For me, it’s just being comfortable and I think that’s why you see a lot of the highest-ranked players continue to do this.

“They’re just comfortable in tough situations on tough courses. So I’m working my way toward that, trying to get more comfortable out here and it’s just a tough test, and you’ve got to hang around. When I got here on Monday, I noticed there was a lot of break on the greens and I played that today and was able to make a few putts. I putted nice and am happy with how I played.

“If it’s blowing like this the whole week, it’s just going to be a hard week. That’s kind of what you want in a U.S. Open, though, right? … I want to play better in the majors.” Henley, who has won three times on the PGA Tour and six times as a pro, collected three birdies and one bogey on each nine, getting up-and-down for a birdie after hitting his approach shot over the 18th green.

Oosthuizen, who won the 2010 Open Championship at St. Andrews, collected five birdies and a single bogey, and was at 4-under through 16 holes when the horn sounded.

Francesco Molinari of Italy, who captured the 2018 Open Championship at Carnoustie, birdied two of the last three holes to cap a 68 and is one stroke back in a tie for third with Rafa Cabrera Bello of Spain, who chipped in for an eagle on the 18th hole.

Tenth-ranked Brooks Koepka, who won the U.S. Open in 2017 and 2018, was second in 2019 but did not play last year because of injuries, was bogey-free until making two bogeys coming home in a 69 and was two shots back in a tie for fifth with sixth-ranked Xander Schauffele of La Jolla and San Diego State, Masters champion Hideki Matsuyama of Japan and Hayden Buckley.

Third-ranked Jon Rahm of Spain was two-under after 17 holes and also on the tie for fifth when the end came, along with Sebastian Munoz of Colombia, who was 2-under after 14 holes.

“It’s been a long time,” said Schauffele, who grew up minutes from Torrey Pines and was in the gallery when Tiger Woods beat Rocco Mediate in a 19-hole playoff to win the 2008 U.S. Open on the South Course. “I was 14 at the time and it was great to see history made.

“I’ve played here before, but it’s a thrill to be playing at Torrey Pines in front of family and friends in the U.S. Open.”

Ninth-ranked Tyrrell Hatton of England shot 70 and was in a tie for 11th that included seventh-ranked Patrick Cantlay of Los Alamitos and UCLA, who was 1-under through 16 holes, while top-ranked Dustin Johnson and 11th-ranked Rory McIlroy of Northern Ireland were both even through 17 holes and in a tie for 23rd.

Eighth-ranked Patrick Reed, who won the Farmers Insurance Open in January at Torrey Pines, was 1-over through 17 and in a tie for 41st, while second-ranked Justin Thomas and fifth-ranked Bryson DeChambeau, the defending champion, were in a tie for 61st at 73.

Seventh-ranked Collin Morikawa of La Canada Flintridge and Cal, who won the PGA Championship at TPC Harding Park last year, struggled to a 75 and is in a tie for 96th that includes 51-year-old Phil Mickelson of San Diego, who won the PGA last month and can complete the Career Grand Slam by winning the U.S. Open.