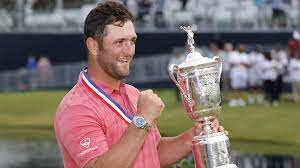 Jon Rahm of Spain no longer is the best golfer in the world without a major title.

The 26-year-old Rahm, who played at Arizona State, sank clutch birdie putts on the last two holes to win the 121st U.S. Open by one stroke over Louis Oosthuizen of South Africa on the South Course at Torrey Pines in La Jolla.

By winning, he joined his idol Seve Ballesteros, Jose Maria Olazabal and Sergio Garcia as the only Spaniards to win major titles, and the first to win the U.S. Open. He will become the top-ranked player in the world when the new rankings are released on Monday.

“I just stayed really positive after what I went through,” said Rahm, who was forced to withdraw from the Memorial Tournament two weeks ago with a six-stroke after three rounds lead because of a positive Covid-19 test. “I got out of quarantine early and got to see my parents, who are here, plus my wife Kelley (who he proposed to at Torrey Pines), and our son, Kepa.

“I have a hard time explaining the way I feel right now and I don’t really know how I made those last two putts. Seve won the Masters, but I know he always wanted to win this tournament, so this is special.

“I don’t know what it is, but we always feel special when we come to San Diego. I’m just so happy. I got my first win here (in the 2017 Farmers Insurance Open), so those memories always help.

Rahm, who had seven previous top-10 finishes in the Grand Slam events without winning, sank a 24-foot birdie putt on the 17th hole and an 18-footer on the final hole to cap a 4-under-par 67 for a winning score of 6-under 278. It was his sixth PGA Tour victory and 13th as a pro.

Oosthuizen, whose only major title came in the 2010 Open Championship at St. Andrews, held a one-stroke lead before Rahm’s finishing birdie putts and went par-bogey-birdie on the last three holes to finish off a 71. He took the lead with birdies on the ninth and 10th holes, but did not make another one and until the final hole and has finished second in the majors six times.

“I played good golf but just fell a little short again,” said Oosthuizen, who hit his drive on the 17th hole into the penalty area en route to the bogey that cost him a playoff with Rahm. “Jon played great, and 4-under on this course is the final round is pretty good.

“The tee shot on 17 was costly, but I played good golf, just not quite good enough. I played well, but felt like I left a couple out there and it’s disappointing.”

Harris English closed out his 68 with three birdies on the last five holes to finish three back in solo third, while 10th-ranked Brooks Koepka, the 2017 and 2018 U.S. Open champion, had a 69 and wound up one more back in a tie for fourth with fourth-ranked Collin Morikawa of La Canada Flintridge and Cal, the 2020 PGA champion, totaled 70, and Guido Migliozzi of Italy, who made his fifth birdie on the last hole for a 68.

Local favorite and sixth-ranked Xander Schauffele of La Jolla and San Diego State shot 71 and wound up five behind in a tie for seventh with 11th-ranked Rory McIlroy of Northern Ireland, the 2011 U.S. Open champion, who had a 73, Branden Grace of South Africa (67), Daniel Berger (68), Paul Casey of England (70) and Scottie Scheffler (72).

Russell Henley, who was tied for the lead after each of the first three rounds, stumbled to a 76 and tied for 13th.

Seventh-ranked Patrick Cantlay of Los Alamitos and UCLA tied for 15th after a 69, while top-ranked Dustin Johnson could manage only a 74 and wound up in a tie for 19th with second-ranked Justin Thomas, who had a 73, and eighth-ranked Patrick Reed, who came in at 67 with birdies on the last two holes.

Fifth-ranked Bryson DeChambeau of Clovis, the defending champion, held a one-stroke lead after two birdies on the front nine but made two bogeys, a double-bogey 7 and a quadruple-bogey 8 on the back nine and tied for 26th after a 77.

Phil Mickelson, who won the PGA Championship last month and still needs to win the U.S. Open to complete the Career Grand Slam, closed with a 76 and tied for 62nd.