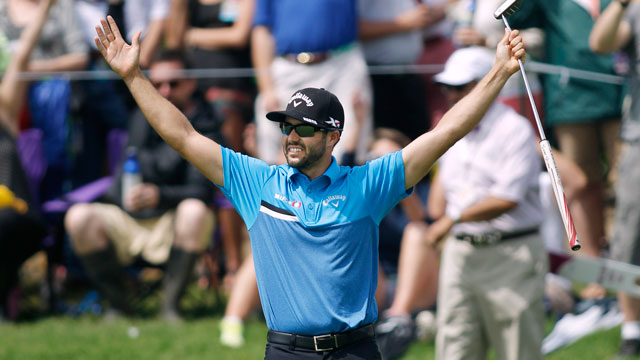 A little more than a week after Justin Thomas became the seventh player in PGA Tour history to shoot 59, Adam Hadwin of Canada joined the club.

The 29-year-old Hadwin, who has 11 pro victories but none on the best tour in the world, holed a nervy three-foot par putt on the final hole at La Quinta Country Club to shot 13-under-par 59 and take a one-stroke lead over rookie Dominic Bozzelli after three rounds in the CareerBuilder Challenge.

“I was shaking, I really was,” said Hadwin, whose 13 birdies tied the PGA Tour record for one round set by Chip Beck when he shot 59 in the 1991 Shriners Hospitals for Children Open. “You don’t want to miss a three-footer for 59.

” … It was just perfect, it was just my day. I got away with a few bad shots on the back nine, but it seemed like every putt I hit went in the hole. It’s great to come out like this in my first event of the year and have a chance to win.”

Hadwin, who won the Chile Classic and the Chiquita Classic in 2014 on the Web.com Tour, hade six straight birdies through No. 7 and added another on the ninth hole to shoot 29 on the front side. Then he made five more in a row through No. 15 and sank an 11-foot putt for one more birdie en route to a 54-hole score of 13-under 199.

Furyk set the PGA Tour record with a 58 last year in the Travelers Championship.

Bozzelli, the first-round leader, birdied three of his first four holes in a 69 on the Nicklaus Course at PGA West, while 36-hole leader Hudson Swafford had a 71 on the Stadium Course at PGA West and was two shots back in a tie for third with Bud Cauley (65), Chad Campbell (66) and Brian Harman (69), the last three at La Quinta CC.

Brendan Steele of nearby Idyllwild and UC Riverside was three down in solo seventh after a 70 on the Stadium Course, while Robert Garrigus posted a 66 at La Quinta and was another stroke back in a tie for eighth with Chris Kirk, who carded a 68 on the Nicklaus Course.

Grayson Murray recorded a 67 at La Quinta and was five back in a tie for 10th with Richy Werenski, who had a 68 on the Nicklaus Course, and Geoff Ogilvy of Australia, who came in with a 68 at La Quinta.

Phil Mickelson, in his first tournament of the year after two sports hernia surgeries, ran out of gas in a 73 that included a double-bogey 6 on the last hole at the Stadium Course and slid to a tie for 21st.