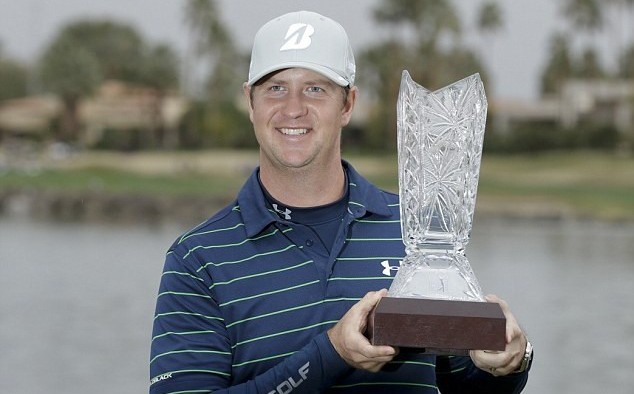 Hudson Swafford collected three straight birdies down the stretch to shoot 5-under-par 67 and claimed his first PGA Tour victory by one stroke over Adam Hadwin of Canada in the CareerBuilder Challenge on the Stadium Course at PGA West in La Quinta.

After sinking an 12-foot birdie putt on the 15th hole and a three-footer on the 16th, the 29-year-old Swafford hit is tee shot on the famed 17th, known as Alcatraz because of its island green, to within a foot and a half from 167 yards.

After tapping in for his third straight birdie, he finished with a solid par for a 72-hole total of 20-under 268.

“They don’t give them away out here,” said Swafford, whose only previous pro victory came in the 2012 Stadion Classic at UGA on what is now the Web.com Tour. “It’s not easy. I’ve been close. I’ve been in the heat lately. Just keep putting myself in position, and this just feels unbelievable.

Hadwin, who a day earlier became the eighth player on the PGA Tour to shoot 59, finished with a 70, getting close with birdies on the 16th and 17th holes. However, he missed the final green with his approach and came up one short after holing an 11-foot par putt.

Bud Cauley holed his second shot from 103 yards for an eagle on the 11th hole en route to a 69 that Brian Harman equaled as they finished two shots back in a tie for third, while rookie Dominic Bozzelli totaled 71 and was another stroke behind in solo fifth.

Brendan Steele of nearly Idyllwild and UC Riverside carded a 70 to wind up four shots down in a tie for sixth with Chad Campbell, who had a 71, and Scott Stallings was one more behind in solo eighth after a 66.

Sean O’Hair and Martin Laird of Scotland both totaled 69 and were six back in a tie for ninth with Richy Werenski, who came in at 70.