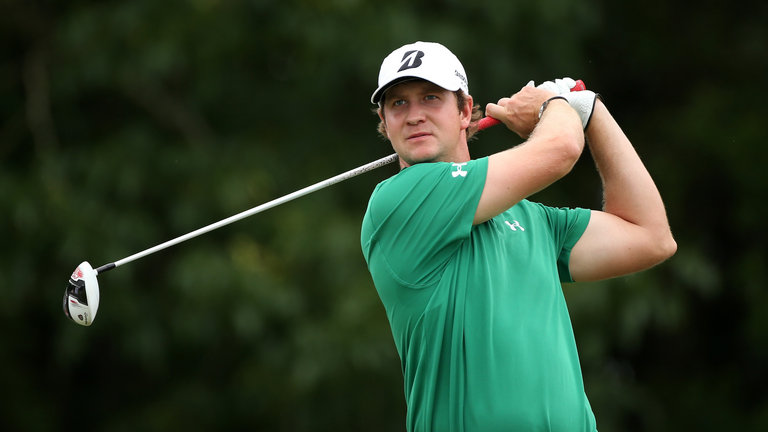 Hudson Swafford posted a second consecutive 7-under-par 65, this one on the Nicklaus Course at PGA West in La Quinta, and took a one-stroke lead over rookie Dominic Bozzelli and Danny Lee of New Zealand midway through the CareerBuilder Challenge.

Swafford, whose opening 65 came at La Quinta Country Club, birdied five of the first 10 holes while finishing ahead of the rain in round two and posted a 36-hole score of 14-under 130.

“It was just solid, I was very patient,” said the 29-year-old Swafford, whose only pro victory came in the 2012 Stadion Classic at UGA on what now is the Web.com Tour. “My tee ball has been very good and there are a lot of bad places you can be in off the tee.

“Then I hit a lot of quality iron shots and putted well, too. I made some and had some lip out, but that’s the way it goes sometimes. … I was just very focused on everything I was doing.”

Bozzelli, who held the first-round lead with a 64 on the Stadium Course at PGA West, followed with a bogey-free 67 at La Quinta Country Club, where Lee had four birdies on each nine in a bogey-free 64.

Brendan Steele, from nearby Idyllwild and UC Riverside, carded a bogey-free 64 on the Nicklaus Course and was two shots back in a tie for fourth with Brian Harman, who had a 64 on the Stadium Course.

Phil Mickelson continued his fine play in his first tournament of the year following two sports hernia surgeries, made an eagle on the 11th hole in a 66 on the Nicklaus Course that left him four behind in a tie for sixth with Martin Laird of Scotland, who shot 66 on the Stadium Course, and Greg Owen of England, who came in at 67 on the Nicklaus Course.

Chris Kirk totaled 66 at La Quinta CC and was five down in a tie for ninth with Chad Campbell, who had a 69 on the Stadium Course, Charles Howell III, who wound up at 68 at La Quinta, and Harold Varner III, who finished with a 71 on the Nicklaus Course.

Defending champion Jason Dufner shot a bogey-free 66 on the Nicklaus Course and was seven strokes back in a tie for 22nd.