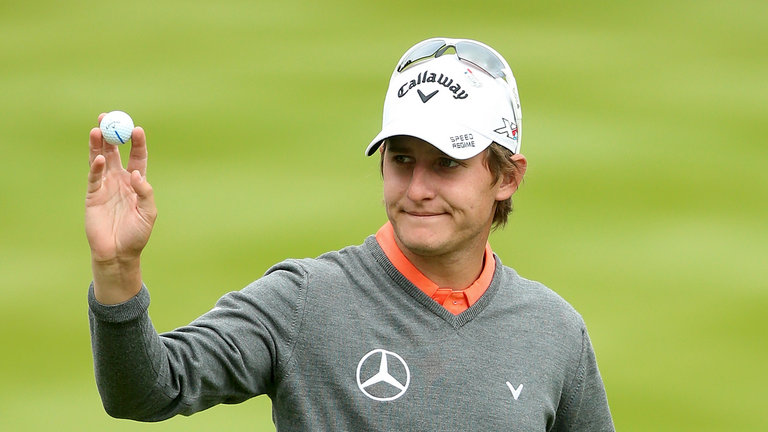 Emiliano Grillo won the first tournament he played as a member of the PGA Tour last season, and he’s back on top of the leaderboard.

The 24-year-old Grillo, who captured the 2015 Frys.com Open and went on to become 2015-16 Rookie of the Year, carded a 5-under-par 67 in the chilly morning wave to tie Matthew Fitzpatrick of England for the lead after the first round of the Arnold Palmer Invitational at Bay Hill Club and Lodge in Orlando, Fla.

“We were one of the first groups out in the morning and the greens were absolutely perfect,” said Grillo, who overcame bogeys on the third and fourth holes in 30-degree weather with birdies on four of the next five holes and three more on the back nine.

“Everything was brand-new last year, the courses, the hotels, I didn’t know where to go. This year, I’m going to play the courses where I played well and everything is easier. I won the first one last year and after that I played well, but just didn’t put four good rounds together. But it’s been all good.”

Fitzpatrick, 22, who has won three times on the European Tour in the last two years, made five birdies in a span of nine holes during his bogey-free 67 in the afternoon.

Lucas Glover, the 2009 U.S. Open champion, birdied four of the last six holes for a 68 and was tied for third with Paul Casey, who overcame a double-bogey 6 on the eighth hole, and Charley Hoffman of Poway and UNLV.

Greg Chalmers and Ryan Ruffels, both of Australia, were tied for sixth at 69, while defending champion Jason Day totaled 70 and was in a huge tie for eighth with Stewart Cink, Kevin Kisner, Francesco Molinari of Italy, Adam Hadwin of Canada, Trevor Immelman of South Africa, Aaron Baddeley of Australia, David Hearn of Canada, Alex Noren of Sweden, Louis Oosthuizen of South Africa, Harold Varner III and J.J. Spaun of Los Angeles and San Diego State.

Olympic Gold medalist Justin Rose of England was tied for 20th at 71, Bubba Watson was tied for 28th at 72, Hideki Matsuyama of Japan was tied for 46th at 73, Rory McIlroy of Northern Ireland and Rickie Fowler of Murrieta were tied for 58th at 74 and Henrik Stenson of Sweden was tied for 75th at 75.