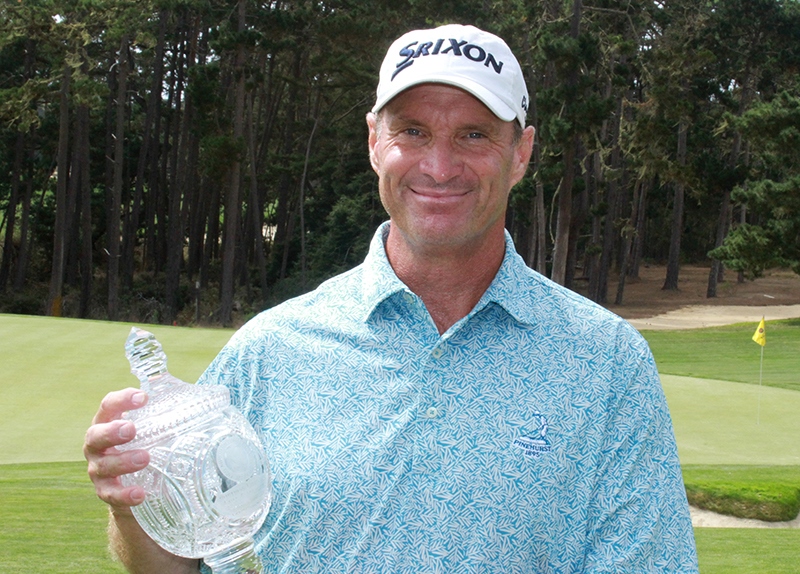 Wilson was unable to get up-and-down for a par on the extra hole after his approach shot rolled on the 10th hole rolled off the green and down onto the tee of the adjacent 11th hole.

“I told (my wife) I’m coming home a winner, or I’m not coming home,” said Funk, who is a cousin of former PGA Tour star Fred Funk. “I’m very excited to win. I haven’t had any major wins in the last two years. It’s validation for me.

“I knew I just had to keep making birdies. Jeff is such a great player. I was just trying to not blow up. I didn’t make a lot of putts today. Compared to the first two rounds, I wasn’t hitting the ball as well nor putting as well.”

Funk, who won the 2006 Trans-Mississippi Amateur Championship and is a two-time winner of the Southern California Mid-Amateur Championship, led after two rounds but struggled in the last day to finish with a score of 69-68-75—212, 1-under-par.

Wilson, the 2018 California Senior Amateur champion and a three-time SCGA Mid-Amateur champion who recently won NCGA Senior Valley Amateur, came from behind to catch Funk at 70-71-71—212.

“I hung in there about as well as I could today,” said Wilson, who made up a four-stroke deficit in the final round. “Robert deserved to win. He played better than I did. If I would’ve won today, it would’ve been a robbery.”

Morgan’s finish strengthened his lead in the NCGA Senior Player of the Year point standings.