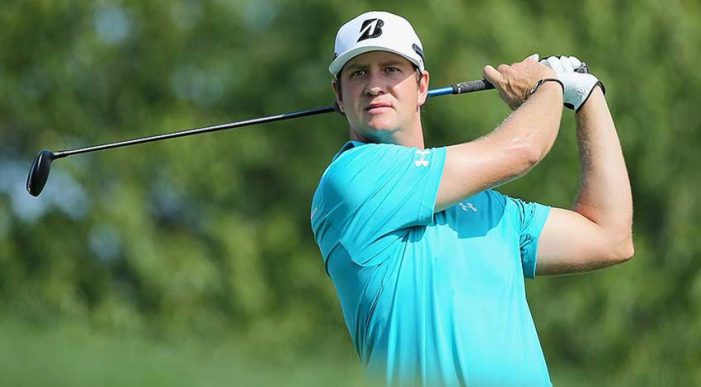 Hudson Swafford was stung by a hornet on his second hole of the day, but it didn’t keep him from staying on top of the leaderboard.

The 33-year-old Swafford, who was tied for the lead after the first round, went on to shoot a 5-under-par 67 and took a two-stroke lead over Sean O’Hair, Justin Suh and Luke List midway through the Corales Puntacana Resort & Spa Championship on the Corales Course in La Altagracias, Dominican Republic.

“Literally right in the joint of my (right) pinky,” Swafford, whose only PGA Tour victory came in the 2017 CareerBuilder Challenge, and of the hornet sting. “It started swelling up, so I was just kind of rubbing ice on it after tee shots for the first five, six holes on the back side.

“I guess it kind of just cleared my mind of the golf thing and just let me focus on something else. (My caddie) said it’s kind of a good omen. We played well (with a 65 in round one) and we ended up playing well again today.”

Swafford, whose caddie also was stung on the forearm, birdied two of the first five holes after starting at No. 10 and added five birdies on the back, including three in a row to finish off a 36-hole score of 12-under 132.

O’Hair, who has won four times on the PGA Tour but not since the 2011 RBC Canadian Open and is coming back from an injury, recorded a second straight 67 as did Suh, from San Jose and USC, while List had a bogey-free 65 that equaled the low score of the day.

“I couldn’t play for about a year and a half,” said O’Hair, who underwent surgery to repair a torn oblique muscle. “It was a difficult recovery and I didn’t know for sure if I was ever going to play again.

“My body isn’t quite all the way back yet, but it’s getting there and I feel great. I’ve been playing a lot at home to prepare for playing three weeks in a row out here because you have to travel, practice and then play.

“But one thing I’ve learned is that I still love the game and want to compete.”

Adam Long collected nine birdies, including six in a row through No. 10 in a 65, and is three shots back in a tie for fifth with Mackenzie Hughes of Canada, who had a 67, Zinjun Zhang of China, who totaled 69, and Sepp Straka of Austria, one of the first-round leaders at 65 who followed that with a 70.

James Hahn of Alameda and Cal finished off a 68 with a birdie at No. 9 and is four behind in a tie for ninth with Sam Burns (67), Patrick Rodgers (69) of Stanford, Kelly Kraft 68, Tyler McCumber (71) and Joseph Bramlett (70) of Saratoga and Stanford.

Henrik Stenson of Sweden, who won the 2016 Open Championship at Royal Troon totaled 69 and is in a tie for 30th, while defending champion Graeme McDowell of Northern Ireland, who won the 2010 U.S. Open at Pebble Beach, shot 70-73—143 to miss the cut by two strokes.