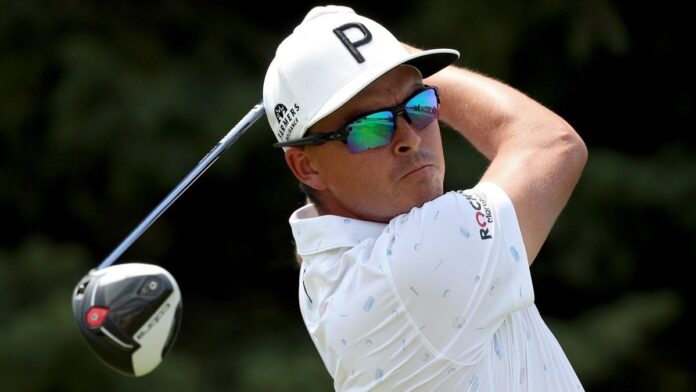 Rickie Fowler’s game has been so spotty the last two seasons that he needed a sponsors exemption to get into the CJ Cup at Summit, but he’s making it pay off.

The 32-year-old Fowler, from Murietta in Southern California, posted a bogey-free, 9-under-par 63 to take a two-stroke lead over Rory McIlroy of Northern Ireland after 54 holes at The Summit Golf Club in Las Vegas.

“I made a couple of birdies early and got off to even a better start after having solid rounds the first two days,” said Fowler, who claimed the last of his five PGA Tour victories in the 2019 Waste Management Phoenix Open. “I had a great front nine and put myself right in the mix, where I haven’t been for a while.

“Then I had a nice back nine, too, and was able to put myself in the lead for the first time since I don’t remember. It’s been a long time coming and I’ve put in a lot of work with my team to get back to this point. It’s been a long road and it’s not over yet.

“I’ve done everything I could for the first three days, but it’s far from over. Today’s over and tomorrow is a completely different day. It’s going to be a shootout.”

Fowler, who opened with 66-66, made four straight birdies through the sixth hole, added another at No. 8 and picked up four more on the back nine while recording a 54-hole score of 21-under 133.

McIlroy, who also hasn’t had his best stuff the last few years but claimed his 19th PGA Tour victory in the Wells Fargo Championship earlier this year, collected six birdies on the front nine, added two more on the back and capped his bogey-free 62 by sinking 21-foot eagle putt on the last hole.

“I actually got off to a little bit of a slow start, but then I made a birdie on the third hole and that was the first of five in a row,” said McIlroy, who tied for fourth in the Olympics. “When you get going like that, negative thoughts don’t even enter your mind.

“Almost every hole on this course is a birdie chance, and you just want to hit the fairways and greens to give yourself a putt at it. I’ve been able to do that well for the first three days this week.

“I just had a great day and I just hope I can keep it going and do it again tomorrow.”

Abraham Ancer of Mexico holed a six-foot eagle putt at No. 14 and had eight birdies in a 63 playing alongside McIlroy and is three shots back in a tie for third with first-round leader Robert Streb, who birdied three of the last five holes for a 65, and Adam Scott of Australia, who had six birdies in a 67.

Said Ancer: “Rory and I were talking about how the last time we played together everybody made a bunch of birdies and that happened again today. We were able to feed off each other again today, made a lot of putts and it was awesome. Hope to do it again tomorrow.”

Tyrrell Hatton of England sank a five-foot eagle putt on the last hole to complete a 67 and is four down in a tie for sixth with Keith Mitchell, who took a five-stroke lead into the third round but had to birdie two of the last four holes to salvage a 73.

Cameron Smith of Australia and Ian Poulter of England both had six birdies and one bogey to post 67s and are five strokes behind in a tie for eighth, while Sam Burns birdied the last hole for a 67 and is six shots back in a tie for 10th with Aaron Wise of Lake Elsinore, who had three straight birdies on the back nine in a 68, Erik van Rooyen of South Africa, who also had a 68, and Harry Higgs, who came in at 70.

Third-ranked Collin Morikawa of La Canada Flintridge and Cal is tied for 14th after a bogey-free 65, ninth-ranked Brooks Koepka birdied the last two holes for a 68 and is tied for 36th, while sixth-ranked Justin Thomas, a two-time CJ Cup champion, shot 70 and is in a tie for 42nd that includes eighth-ranked Louis Oosthuizen of South Africa, who carded a bogey-free 65.

Second-ranked Dustin Johnson carded a 67 and is in a tie for 46th that includes fifth-ranked Xander Schauffele of La Jolla and San Diego State, who had a third straight 69, while defending champion Jason Kokrak is tied for 51st after a 65, and 10th-ranked Tony Finau totaled 70 and is tied for 56th.