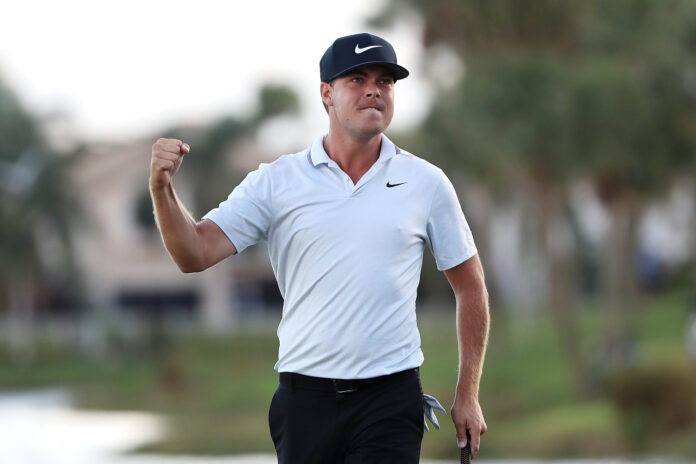 Keith Mitchell didn’t score quite as well as he did the day before, but it was still much better than any other player in the CJ Cup at Summit.

The 29-year-old Mitchell shot 8-under-par 64, after opening with a 62, and took a five-stroke lead over Jordan Spieth, Harry Higgs, Adam Scott of Australia and Seonghyeon Kim of South Korea at The Summit Golf Club in Las Vegas.

“I felt like I’ve either had the game, the potential I should say, to play a lot better than I have on a consistent basis,” said Mitchell, whose only PGA Tour victory came in the 2019 Honda Classic. “I just wanted to take this year and just try to be as consistent as possible because I felt like feast or famine was kind of my game the last four years, and I wanted to be a little bit more consistent, a little bit more patient.

“Play like a Tour pro and not just like a young kid out there firing at flags. It’s a lot harder to do than I thought, but when your putter’s hot like it was the last couple days, it kind of just makes up for the rest.

“As long as I can continue the play that I’m having … definitely (trying to win) the second one for me has seemed to be a lot harder.”

Mitchell, who kick-started his day by sinking a 59-foot eagle putt on the third hole, added seven birdies and made his only bogey at No. 11 while posting a 36-hole score of 18-under 126.

Spieth, who ended a four-year winless drought by winning the 2021 Valero Texas Open, made a 14-foot eagle at No. 6 and birdied four of the last six holes in a 65, while Kim sank a six-foot eagle putt on the last hole to cap a bogey-free 63.

Higgs holed a six-footer for birdie on the last hole to cap a bogey-free 67, while Scott, who attended UNLV, made putts of three-feet on No. 14 and five feet on No. 18 for eagles in a 63 late in the day.

“I played well, just like yesterday,” said Spieth, who has won 12 times on the PGA Tour, including three majors. “I’m hitting the ball well, especially with the driver and my irons, and my putting has been good. My chipping could be better, but overall I’m playing well. I just have to keep it up in the weekend.”

Tyrrell Hatton of England collected nine birdies in a 65 and is six shots back in a tie for sixth with Rickie Fowler, who birdied three of the last five holes in a second 66.

Mackenzie Hughes of Canada highlighted a bogey-free 62 with a six-foot eagle putt at No. 8 and is seven down in a tie for eighth with Aaron Wise of Lake Elsinore (67), Viktor Hovland (68) of Norway, Erik van Rooyen of South Africa (66), Ian Poulter of England (67), Paul Casey of England (65), Cameron Smith of Australia (67) and first-round leader Robert Streb (72).

Abraham Ancer of Mexico hit the shot of the day when he holed his second shot on the 14th hole for a rare albatross in a 65 and is tied for 19th, while sixth-ranked Justin Thomas, a two-time winner of the CJ Cup, birdied the last hole for a 67 and is in a tie for 28th that includes reigning Masters champion Hideki Matsuyama of Japan, who birdied four of the last five holes for a 70.

There was no cut in the 78-player, limited field event.