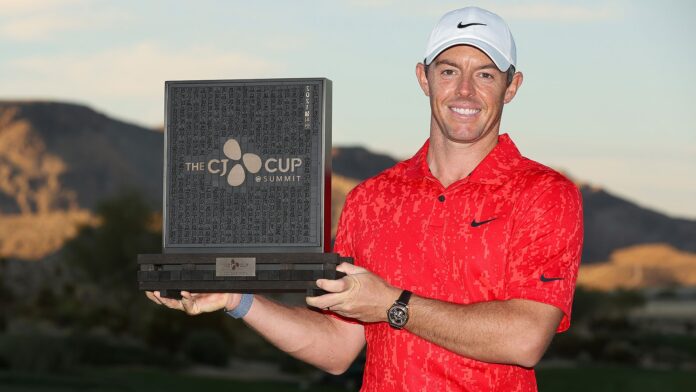 Everyone can stop asking what’s wrong with Rory McIlroy.

The 32-year-old from Northern Ireland closed with a 6-under-par 66 to claim his 20th PGA Tour victory in the CJ Cup at Summit by one stroke over third-ranked Collin Morikawa of La Canada Flintridge and Cal at The Summit Golf Club in Las Vegas.

“It is a big carrot,” said McIlroy, who was disappointed by his play recently in the Ryder Cup, said of reaching 20 wins. “I didn’t know it would be this week. Being me is enough. Being me can let me do things like this. It was huge, it really was.

“There was a lot of reflection in the couple of weeks (since the Ryder Cup). This is what I need to do. I need to play golf, simplify it and just be me. I think for the last few months I was trying to be someone else to try to get better but realized that being me is enough and being me, I can do things like this.”

McIlroy, who also captured the Wells Fargo Championship in May and has 29 wins as a pro, moved into contention by shooting 62 in round three, made four birdies on the front nine and one on the back in the final round, but it was his 34-foot eagle putt at No. 15 that gave him the victory at 25-under 263.

Morikawa, 24, who won the Open Championship at Royal St. George’s in July, collected seven birdies on the front nine and finished with a 62, but his seven-foot eagle putt on the last hole on a course where he is a member left him one stroke short.

“Whenever you shoot 62 you’re always going to be pleased,” said Morikawa, who also won the WGC-Workday Championship in February and has five PGA Tour victories. “But I thought I left a few out there, especially with some putts.

“But overall I’m very pleased the way this last 18 went, especially at a course that I’ve played a lot. I felt very comfortable and it’s a good way to start the season.”

Keith Mitchell, who held the lead after opening with 62-64, birdied three of the last five holes for a 67 and was three shots back in a tie for third with Rickie Fowler of Murrieta, the 54-hole leader who was ahead by three early in the final round but made a double-bogey 7 at No. 6 en route to a 71.

Sam Burns, who won the Sanderson Farms Championship two weeks ago, had a second straight 66 to wind up four down in a tie for fifth with Aaron Wise of Lake Elsinore, who also shot 66, Talor Gooch, who holed out from 94 yards on the last hole to cap a bogey-free 62, and Adam Scott of Australia, who birdied the last two holes for a 69.

Sungjae Im of South Korea, who won the Shriners for Children’s Open last week, birdied five of the last six holes for a 64 and finished five strokes behind in a tie for ninth with Gary Woodland (65), Harry Higgs (67), Cameron Smith of Australia (68) and Robert Streb (70), who led after the first round with a 61.

Second-ranked Dustin Johnson made two eagles in a 68 and finished in a tie for 45th that included 10th-ranked Tony Finau, who had a bogey-free 65, while defending champion Jason Kokrak tied for 58th after a 68, and Masters champion Hideki Matsuyama of Japan also came in at 68 and tied for 59th.