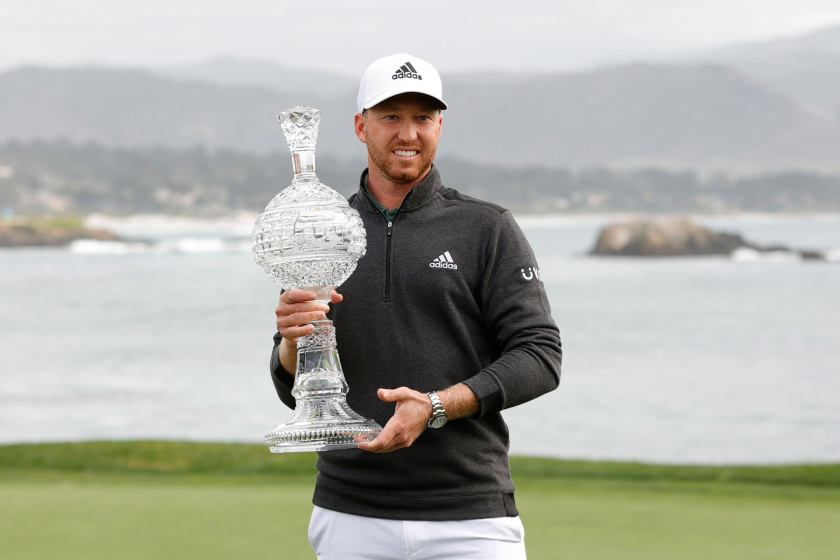 Daniel Berger overcame a big stumble on the final hole a day earlier, and in a big way.

“That’s right at the top, the best putt I’ve every hit in my life,” said Berger, who in round three hit his tee shot out of bounds and made a double-bogey 7 to fall out of the lead. “And that was probably the best 3-wood shot (from 250 yards) I have ever hit to get onto the 18th green. And then to roll in the putt was amazing.

“I’ve worked so hard the last six or seven months and it’s nice to see the results, especially heading toward the Masters. It shows me that I can win in any situation, playing with the lead or coming from behind.

“Just to play here and walk the course is a great experience, but to win at Pebble Beach is special. It’s going to be part of my schedule for years to come.”

Berger, who claimed his fourth PGA Tour victory, sank a 22-foot eagle putt on the second hole and collected four birdies against a single bogey in a 7-under-par 65 to record a winning score of 18-under 270.

McNealy, 25, from Portola Valley, rattled off five birdies on the back nine in a 66 and posted his best finish on the PGA Tour after he tied the Stanford record of 11 career victories held by Tiger Woods and Patrick Rodgers.

“I played Pebble Beach for the first time as a present on my 16th birthday,” said McNealy, whose family once lived on the course. “It was fun, a lot of fun. I love playing on the West Coast, the poa annua greens and even the cold wind here.

“I learned a lot today that’s going to help me going forward. I’m proud of myself, especially the way I got it going on the back nine after stalling early. This is a step in the right direction.”

Jordan Spieth, who led after the second and third rounds while seeking his first victory since the 2017 Open Championship, closed with a 70 to finish three shots back in a tie for third with Patrick Cantlay of Los Alamitos and UCLA, who birdied the last hole for a 68.

Paul Casey of England, who won the Omega Dubai Desert Classic two weeks ago and made the long flight to the U.S. after tying for 12th last week in the Saudi International, shot 68 and was one more down in a tie for fifth with Nate Lashley, who led before making a double-bogey 7 at No. 16 en route to a 69.

Charley Hoffman of Poway posted a 66 and was five strokes behind in a tie for seventh with Max Homa of Valencia and Cal (68), Cameron Tringale of Mission Viejo (67), Jason Day of Australia (69) and Russell Knox of Scotland (70).

Defending champion Nick Taylor of Canada tied for 39th after a 72.