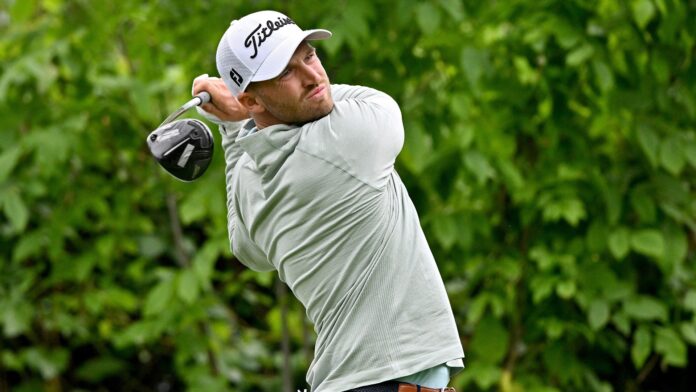 Wyndham Clark, who on Monday qualified for the 122nd U.S. Open next week, kept things going on Thursday.

The 28-year-old Clark (pictured) posted a bogey-free, 7-under-par 63 to take a one-stroke lead over Matt Fitzpatrick of England after the first round of the RBC Canadian Open at St. George’s Golf and Country Club in Toronto.

The tournament was not played the last two years because of the Coronavirus.

“It’s nice to see some putts go in,” said Clark, who came closest to winning as a pro when he lost to Brian Gay in a playoff at the 2020 Bermuda Championship. “I haven’t shot a low one in a while. I’ve had a lot of couple under par, 3-, 4-under pars in my last few events, but really felt like I left a lot of shots out there. This round I maximized pretty much everything out there.

“ … Today it all kind of came together. That’s all I felt I’ve needed all year was just a little jump-start like this where I see some putts go in. It’s OK, I’m doing the right things, and I’m finally getting rewarded for all the hard work.”

Clark, who best results this season were a tie for 10th in the Zurich Classic of New Orleans with teammate Cameron Tringale and solo 13th in The American Express, started at No. 10 and birdied five of his first seven holes before adding two more birdies on the front nine.

Fitzpatrick, who has won seven times as a pro but not yet on the PGA Tour, also collected seven birdies, but also made a bogey at No. 4 in his 64, while Doug Ghim shot a bogey-free 65 and is tied for third with Harold Varner III, who highlighted his 65 with a 48-foot eagle putt on the 11th hole.

“I’m really, really happy with the way I played today, just solid all around,” said Fitzpatrick, who tied for fifth in the PGA Championship last month after tying for 14th in the Masters. “I had a couple of opportunities to chip it a little bit closer, but other than that, I’m being really picky. Everything in my game was going well. So, yeah, I’m happy with the start.

“I’ve always been kind of more of a straighter player and solid putter. To me around here, it’s just about giving myself plenty of chances to get shots off the fairway to give myself chances for birdie. Today I did that well.”

Eighth-ranked Rory McIlroy of Northern Ireland, who won the RBC Canadian Open the last time it was played in 2019, had six birdies in a 66 and is tied for fifth with Mackenzie Hughes of Canada, who made a 12-foot eagle putt on the 11th hole, Tony Finau, who had three straight birdies on his back nine, and Lee Hodges, who had five birdies and a single bogey.

Ninth-ranked Sam Burns carded five birdies in a 67 and is in a big tie for ninth with Patrick Rodgers of Stanford, Shane Lowry of Ireland, Carlos Ortiz of Mexico, Jim Knous, Mark Hubbard, Alex Smalley, Jonas Blixt of Sweden and Keith Mitchell.

Top-ranked Scottie Scheffler, the Masters champion, totaled 69 and is in a tie for 25th that includes sixth-ranked Justin Thomas, the PGA champion, while fourth-ranked Cameron Smith of Australia didn’t make a birdie while struggling to a 76 and is tied for 135th.