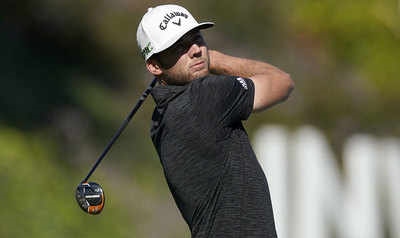 Sam Burns’ five-stroke lead was down to two shots when darkness finally halted play in the third round of the Genesis Invitational.

Burns, trying to win for the first time on the PGA Tour, made bogeys on his last two holes and was 2-over-par for the day and 10-under for the tournament to hold a two-stroke lead over Matthew Fitzpatrick of England in the Los Angeles-area event at Riviera Country Cub in Pacific Palisades.

There was a four-hour delay early in the day caused by winds that reached gusts 35 mph, which started when Burns was about to hit his tee shot on the first hole, before play finally resumed in the afternoon on a sunny day.

“The balls weren’t holding on the greens and there’s a fine line between tough and fair, but I think this crossed the line and it was a good thing they stopped play,” said Burns, whose only pro victory came in the 2018 Savannah Golf Championship on the Korn Ferry Tour. “This golf course is difficult, even with no wind, but this was off the charts for a while.

“It’s been a tough three days, and the wind returned late in the day, so it was even difficult holding the ball on the greens on the downwind holes, so there was not a lot of opportunity out there today.

“But I’m still ahead and looking forward to the opportunity tomorrow.”

Burns, who has led since shooting 64 in round one, made eight pars and a bogey at No. 8 on the front nine before carding his only birdie at No. 10 and bogeys at Nos. 12 and 13.

Fitzpatrick, who has won six times on the European Tour but never on the PGA Tour, made four birdies in a row through No. 8 and was three-under for the round through 17 holes and 8-under for the tournament.

“It was difficult out there because of the wind, but I was able to hang on and make some birdies,” said Fitzpatrick, whose best finish on the PGA Tour was solo second in the 2019 Arnold Palmer Invitational. “I made some birdies on the front nine and held on at the start of the back nine.

“On this course, there you are places you want to avoid because it leads to automatic bogeys. It was a little cold and windy, but I was able to play pretty well, and hope to keep it going tomorrow.”

Top-ranked Dustin Johnson, who has won four of his last eight tournaments, was even par for the third round and 7-under for the tournament through 13 holes and three shots back in a tie for third with Max Homa of Valencia and Cal, who eagled the first hole, and Wyndham Clark, who were both 1-under for the round. Homa had played 13 holes and Clark 15.

Eighth-ranked Patrick Cantlay of Los Alamitos and UCLA was 1-under for 16 holes and four behind in solo sixth, while Matt Jones of Australia and Talor Gooch were both 2-under for the round after 69s and in a tie for seventh with Tony Finau, who shot 70, Alex Noren of Sweden, who was even-par for the round after 15 holes, and Jason Kokrak, who was 2-over 13 holes.

Second-ranked Jon Rahm of Spain totaled 72 and was in a tie for 19th that included fourth-ranked Xander Schauffele of La Jolla and San Diego State, who finished at 71, and sixth-ranked Collin Morikawa of La Canada Flintridge and Cal, who was 2-under through 16 holes.

Defending champion Adam Scott of Australia was 4-over through 15 holes and in a tie for 58th.