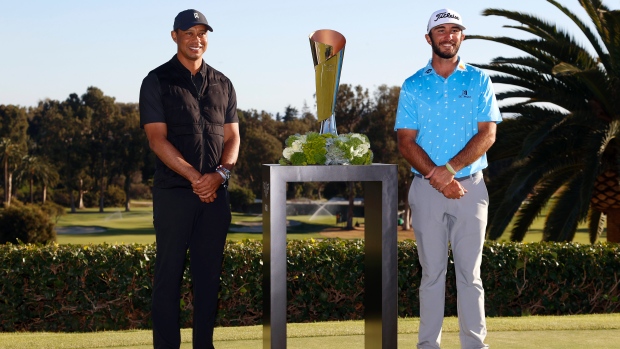 Max Homa has been going to Riviera Country Club in Pacific Palisades since he was a kid growing up about 30 miles north in Valencia, and this time he won there.

The 30-year-old Homa, who was an All-American at Cal, made par on the second playoff hole to turn back perennial runner-up Tony Finau and win the Genesis Invitational, the Los Angeles-area event on the PGA Tour.

“I’ve been coming here for so long and it’s my favorite course in the world,” said an emotional Homa, whose only other PGA Tour victory came in the 2019 Wells Fargo Championship. “I’ve been watching this tournament my whole life, so I don’t know how to top this. It was a special week.

“This is Los Angeles, the City of Champions with the Dodgers, the Lakers and (tournament host) Tiger Woods. I remember watching Tiger play here and told myself to go out there today and play like him. I came here with a lot of confidence and it was a great week.

“I hope this is just the beginning.”

Homa, who also won twice on what is now the Korn Ferry Tour, lipped out a putt from a little more than three feet that would have won the tournament on the final hole of regulation, and closed with a bogey-free 66 that included a seven-foot birdie putt on the 17th hole to tie Finau at 12-under 272.

Finau, who has finished second in three straight tournament and nine times overall since his only PGA Tour victory in the 2016 Puerto Rico Open, collected four birdies on each nine but made a costly bogey at No. 15 in a 64 that was low score of the day.

“Right now I’m disappointed, but I shot 64 in the final round when I needed it to get into a playoff,” said Finau, who hit his tee shot at par-3, 14th on the second playoff hole into a bunker and missed a nine-foot par putt to extend the playoff. “I played well, but it’s bittersweet.

“But when I look back in the next few days, I will think about the positives. I made a lot of key putts to stay in it and my game is in a great place. But I’ll just keep going in the right direction with some big tournaments coming up.”

Sam Burns, who led all the way from an opening 64 until making three bogeys on the back nine in a 69, was one stroke back in third in search of his first PGA Tour victory, while Cameron Smith of Australia was three down in fourth after a 67.

Second-ranked Jon Rahm of Spain shot 66 and finished five shots behind in a tie for fifth with Viktor Hovland of Norway, who wound up at 67, and Matthew Fitzpatrick of England, who had a 71.

Top-seeded Dustin Johnson, who won four of his previous eight tournaments, made five bogeys in a 72 and was six strokes behind in a tie for eighth with Francesco Molinari of Italy, who wound up at 67, Wyndham Clark, who finished at 69, and Matt Jones of Australia, who came in at 70.

Fourth-ranked Xander Schauffele of La Jolla and San Diego State closed with a 69 and finished in a tie for 15th that include eighth-ranked Patrick Cantlay of Los Alamitos and UCLA, who had a 72, while defending champion Adam Scott of Australia tied for 38th after a 66, and sixth-ranked Collin Morikawa of La Canada Flintridge and Cal shot 73 to tie for 43rd.