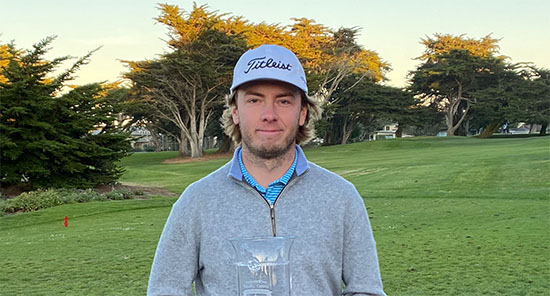 Brett Thawley of Saratoga sank a 25-foot birdie putt on the 17th hole that carried him to a one-stroke victory over Jackson Koivun of San Jose in the Amateurgolf.com Pacific Grove City Championship in breezy conditions at Pacific Grove Golf Links.

One of Thawley’s playing partners had a similar putt from a little farther away, but he didn’t watch on the par-3 hole next to Crespi Pond.

“I actually looked away from it,” said Thawley, who played at San Jose State. “I did that a few times today where I watched and it messed me up. So I just went with my instincts and completely turned away, believe it or not.
“I think the wind helped me out. I played last week down in Stockton in a two-man event and it was blowing out there even at 8:30 in the morning. I kept it under the wind there and I think that helped me out here this week.”

“Right off this first hole is a cemetery where my great-grandparents are buried,” said Thawley, adding that it gave his victory a little extra meaning. “They had a vacation home here and when they passed they wanted to be buried as close to the golf course as possible. So that was kind of neat.”

Pete Higgins of Mercer Island Wash., totaled 73-69—142 to capture the Senior Championship by one stroke over Casey Boyns of Pacific Grove, who missed a birdie putt on the final hole and finished 69-74—143, while Todd Barsotti of Fresno, who wound up at 71-73—144.