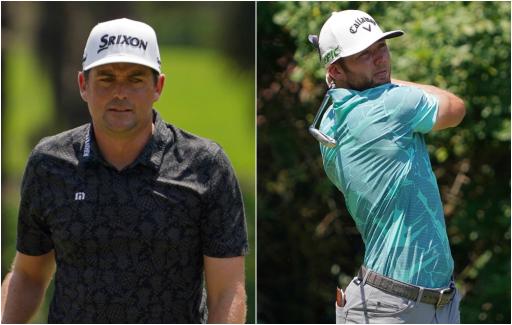 Keegan Bradley and Sam Burns went head-to-head all day in the final group only to wind up right where they started—tied for the lead.

And they will do it all over again in the last twosome of the final round.

Bradley (pictured left) and Burns (right) both shot 3-under-par 69 to remain even at the top of the leaderboard after three rounds of the Valspar Championship on the Copperhead Course at Innisbrook Resort in Palm Harbor, Fla.

“I played really well all day,” said the 24-year-old Burns, whose best finish on the PGA Tour was third in the Genesis Invitational at Riviera earlier this year. “I got off to a really good start, got a couple bad bounces on the back nine that led to bogeys, but overall I played very solid all day.

“The golf course is changing quickly, especially the greens, which had so much more bounce on the back nine. I’m sure it’s going to play again tough tomorrow, but I just have to put the ball in the right spots, go out and play solid golf, and I’ll be right in there.”

Burns made a three-foot eagle putt on the first hole and added birdies at Nos. 3 and 5 to take a two-stroke lead, but had bogeys on two of the last four holes to finish at 14-under 199. His clutch, nine-foot bogey putt on No. 18 kept him tied for the lead.

Bradley, who has had at least a share of the lead after all three rounds, stayed close with two birdies on the front nine and got back even by chipping in from 34 feet for an eagle at No. 15, but also made two bogeys on the back nine.

“I had a terrible, downhill lie but the ball was going right at the pin and went in, giving me a real bolt of energy,” Bradley, the 2011 PGA champion, said of his eagle. “I probably played better today than either of the first two days, but I just didn’t make any putts. I hit almost ever shot the way I wanted, shot 69 and I’m still tied for the lead.

“I know I can do it, I’ve won some big tournaments in my career. I just have to go about my business, play well and I will have a chance to win tomorrow.”

Max Homa of Valencia and Cal holed out from 138 yards on the sixth hole for an eagle and sank a 33-foot eagle putt on the last hole to cap a 66 and is one stroke behind in solo third.

“I’m playing well and feel like I have as a good a chance as anybody,” said Homa, who will defend his title in the Wells Fargo Championship next week and also won the Genesis Invitational at home in Southern California earlier this year.

Left-hander Ted Potter Jr. holed a nine-foot eagle putt at No. 11, added eight birdies in a 63 and is four shots back in a tie for fourth with Abraham Ancer of Mexico, who carded a 66, Joaquin Niemann of Chile, who had a bogey-free 67, and Cameron Tringale of Mission Viejo, who also totaled 67.

Charley Hoffman made bogeys on the last two holes to finish at 70 and is one more down in solo eighth, while Brandt Snedeker had four birdies on the back nine in a 67 and is six strokes behind in a tie for ninth with Bubba Watson and Troy Merritt, who both came in at 68.

Second-ranked Justin Thomas sank a seven-foot eagle putt on the 11th hole in a 67 and is tied for 18th, two-time defending champion Paul Casey of England is tied for 47th after a 72, and top-ranked Dustin Johnson struggled to a 74 and is tied for 60th.