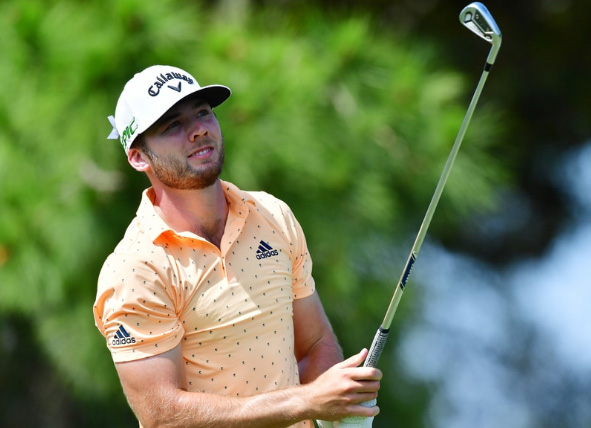 Keegan Bradley hit the shot of the day, but Sam Burns caught him at the top of the leaderboard.

Bradley holed out from 119 yards for a walk-off eagle on the ninth hole while finishing at 5-under-par 66, while Burns (pictured) put up a bogey-free 63 a little later and they hold a four-stroke lead over three golfers midway through the Valspar Championship on the Copperhead Course at Innisbrook Resort in Palm Harbor, Fla.

“I had 119 to the hole and knew I hit a good shot and didn’t see it go in the hole, but I could tell it did by the reaction of the crowd,” said Bradley, the 2011 PGA champion. “That will put me in the final group tomorrow and that’s where we want to be out here.

“I’ve played well in these first two rounds, but was a little better yesterday. I’ve been hitting the ball well and putting well. I was struggling for a while, but started to turn it around early this year and have just kept it going.

Bradley, who claimed the last of his four PGA Tour victories in the 2018 BMW Championship, birdied his first two holes after starting at No. 10 before making his only bogey at No. 12, and had more two birdies on the front before his eagle left him at 12-under 130.

The 24-year-old Burns opened with birdies on three of the first six holes and added five more in six holes to start the back nine.

“I made a couple of nice par saves on Nos. 3 and 4 that were huge in keeping the momentum going,” said Burns, whose best finish on the PGA Tour was third in the Genesis Invitational at Riviera earlier this year. “Then I got to the back nine and really got it going. I’m comfortable on these Bermuda greens because this is what we play on back home (in Louisiana).

“I just want to stick with what I’ve been doing and have a good game plan. I know there are going to be some challenges and tough times over the weekend, but I just want to hang in there mentally.”

Lucas Glover, the 2009 U.S. Open champion, posted a bogey-free 65 and is tied for third with Charley Hoffman of Poway, who shot a bogey-free 66, and Max Homa of Valencia and Cal, who sank a five-foot eagle putt at No. 15 in a 68.

Two-time major champion Zach Johnson had a bogey-free 67 and is five shots behind in a tie for sixth with 2011 Masters champion Charl Schwartzel of South Africa (65), Sungjae Im of South Korea (67), Tom Lewis of England (65) and Hang Lebioda (69).

Two-time defending champion Paul Casey of England had a 71 and is in a tie for 33rd that includes top-ranked Dustin Johnson, who shot 68, while second-ranked Justin Thomas is tied for 41st after a 71.

Seventh-ranked Patrick Reed finished at 70-72—142 and missed the cut by one stroke.