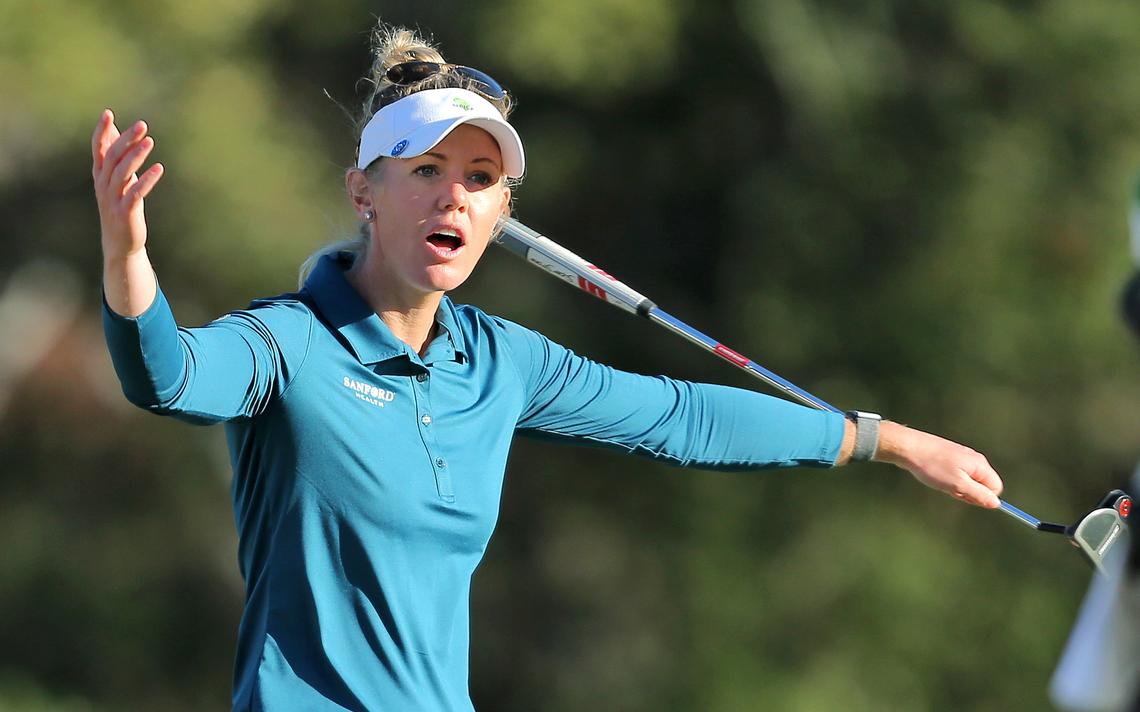 Amy Olson hit one of the shots of the day and it powered her to the top of the leaderboard after the first round of the 75th U.S. Women’s Open.

The 28-year-old Olson, who has never won on the LPGA Tour, made a hole in one on the 16th hole while shooting 4-under-par 67 on the Cypress Creek Course to take a one-stroke lead over Moriya Jutanugarn of Thailand, A Lim Kim of South Korea and Hinaku Shibuno of Japan at Champions Golf Club in Houston.

“Obviously, making a hole in one is fun any time, but especially in the U.S. Women’s Open,” said Olson, who set an NCAA record with 20 victories at North Dakota State. “The wind was coming off the right, so I just hit a little fade with an 8-iron to hold it off against the wind. It was literally perfect and I was so excited.

“ … I started out a little slowly with an early bogey, but I told myself to stay patient and there are some birdies out there. I think majors sort of fit my game because I’m one of the longer hitters. But then you have to be a little conservative going into some of the greens and you have to pick your spots.

“There is supposed to be some rain tomorrow, but I’ll just try to keep doing what I did today.”

Olson, whose tie for second in the 2018 Evian Championship was her best finish as a pro, started on the back nine and made her only bogey at No. 11 before her hole in one from 141 yards on No. 16, a birdie on the next hole and two more birdies on the front nine.

Jutanugarn, whose only LPGA Tour victory came in the 2018 Hugel-JTBC LA Open at Wilshire Country Club in Pacific Palisades, carded the only bogey-free round of the day at 68 on the Jackrabbit Course, where Kim collected five birdies against two bogeys, and Shibuno birdied three of the first six holes on the Cypress Creek Course.

Second-ranked Sei Young Kim of South Korea (Jackrabbit) finished at 72 and is in a tie for 37th that includes fourth-ranked Danielle Kang of Westlake Village and Pepperdine (Cypress Creek), and sixth-ranked Brooke Henderson of Canada (Jackrabbit).

Yu Jin Sung of South Korea made the second hole in one of the day from 169 yards on the on the fourth hole of the Cypress Creek Course and is tied for 108th at 76.