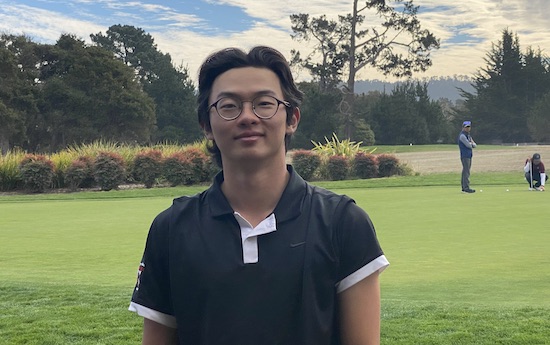 Joshua Lim of San Francisco made a par on the first playoff hole to turn back Wes Payne of Menlo Park and win the Amateurgolf.com Christmas Classic at Del Monte Golf Course in Monterey.

First-round leader Lim, a junior at Carnegie Mellon University in Mountain View, posted a score of 68-69—137, 5-under-par, while Payne came on strong in the second round to catch him with a score of 73-64—137.

“I have a bad habit, I just have to look at the leaderboard whenever I play,” said Lim, who played at Lowell High School and won the 2019 San Jose City Championship. “I was expecting to be competing with the players in my group, mostly. But this guy just came out of nowhere and played some crazy golf.”

Payne, who captured the 2011 Mountain View City Championship and the 2012 Amateurgolf.com Bay Regional, birdied six of the first 11 holes in the second round and made his only bogey at No. 12.

The he added birdies on the 13th, 15th and 17th holes to catch Lim, and was the leader in the clubhouse.

“I putted and chipped so badly yesterday so I wanted to do that better today,” Payne said. “I got up-and-down really well on the par-5s and the short par-4s.”

Lim fell behind with a bogey when he missed the green on the 16th hole and could not get up-and-down for par, but hit a long drive at the par-5 17th before lacing his second shot to within 15 feet of the hole. He missed the eagle putt, but tapped in for a birdie to tie Payne.

“Honestly, that (approach on No. 17) was the shot of the tournament for me there,” Lim said. “I pulled off exactly what I wanted to do. I knew if I could put myself in a good position and maybe give myself an eagle putt, it would relieve some pressure off the last hole.”

Todd Barsotti of Fresno, a former quarterback at Fresno State, captured the Senior Division with a score of 73-74—147, while Casey Boyns of Monterey shot 77-71—148 to tie for third with Jeff Britton of San Francisco, who finished at 74-74—148,