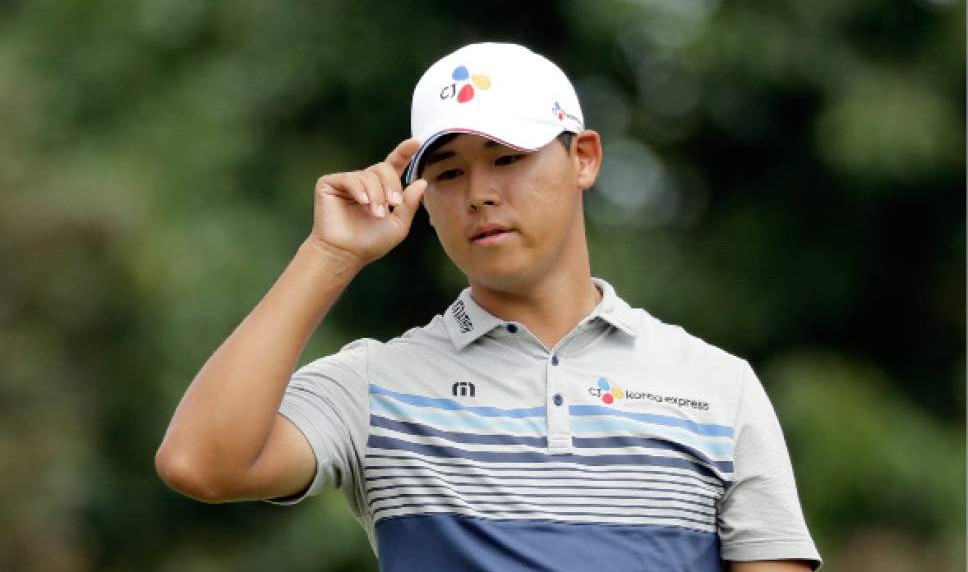 Si Woo Kim belied his age in the pressure-cooker of the final round in the Players Championship.

Kim finished with nine consecutive pars, saving par 10 times in his round when he missed the green in regulation, to post a score of 10-under 278.

“I still can’t believe I’m the champion and the youngest for this tournament,” Kim, who claimed his first PGA Tour victory last year in the Wyndham Championship, said through an interpreter. “I’m honored to win the ‘Fifth Major.’

“I’m usually very nervous, but by winning last year I got a two-year exemption and now I can be aggressive. This week, I was not as nervous as usual.”

Poulter was two strokes back and had a chance to put some pressure on Kim playing one hole ahead of the leader, but hit his second shot from the rough into a bush on the final hole and was forced to take a drop that gave him a penalty stroke.

The Englishman recovered with a brilliant shot to within tap-in range for a bogey to close with a 71, while Oosthuizen sank an eagle putt on the 11th hole before making two bogeys down the stretch to finish at 73.

“There’s a time and place to have a shank and that’s not it,” said Poulter, who last month thought he had lost his PGA Tour card, but an error was found in the points process and he landed a spot in the Players. “I followed one of the worst shots ever with a pretty good one.

“I had a good week and congratulations to a very good young player.”

Rafa Cabrera Bello of Spain recorded the third double-eagle 2 in tournament history (and first on the 16th hole) from 181 yards and finished with a 70 to wind up four shots back in a tie for fourth with Kyle Stanley, who joined Paul Azinger (1987) as the only players to make four birdies on the infamous island green at the 17th hole in the Players and closed with a 75.

Adam Scott of Australia, the previous youngest winner of the tournament at 23 in 2004, totaled 70 and wound up five down in a tie for sixth with Brendan Steele of Idyllwild and UC Riverside, who shot 68, Lucas Glover, who had a 70, and Francesco Molinari of Italy, who came in with a 70.

Alex Noren of Sweden was another shot back in 10th after a 73.

Top-ranked Dustin Johnson carded a 68 to tie for 12th, seventh-ranked Henrik Stenson of Sweden tied for 16th after a 71, fourth-ranked Hideki Matsuyama of Japan shot 69 to tie for 22nd, sixth-ranked Sergio Garcia of Spain struggled to a 78 and tied for 30th, second-ranked Rory McIlroy tied for 35th with a 75 and Phil Mickelson tied for 41st following a 71.