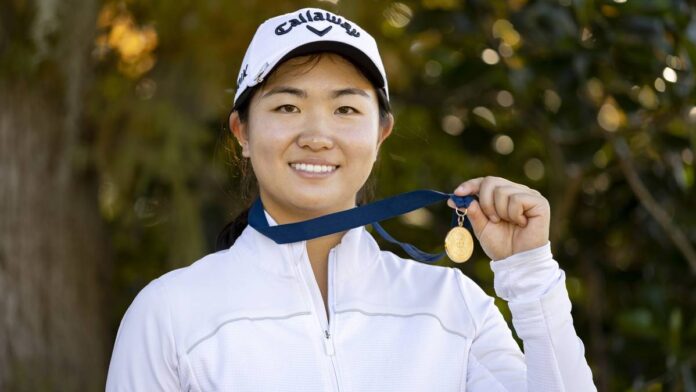 Rose Zhang of Irvine has won the Mark H. McCormack Medal, awarded by the United States Golf Association and the R&A to the leading woman in the World Amateur Golf Ranking, for the second straight year.

“To receive any award with the USGA and the R&A’s names on it is incredible, so to have it happen a second time is both rewarding and humbling,” said Zhang, who has been named to the U.S. team for the Curtis Cup Match later this month in Wales.

“The work I’ve put into my game over the past few years has truly been paying off, and I am so grateful to all who have supported me along the way. I look forward to continuing to reach new heights as I take my game to the collegiate level.”

Zhang continued her incredible run of golf this year when she defeating Bailey Davis, 6 and 4, in the 36-hole final to win the U.S. Girls Junior Championship in July at Columbia Country Club in Chevy Chase, Md.

Since receiving the McCormack Medal for the first time last October, Zhang has competed in three LPGA major championships, making the cut in the Amundi Evian Championship last month. She missed the cut in the 2020 and 2021 U.S. Women’s Opens after tying for 11th and earning low-amateur honors in the ANA Inspiration last September. She also tied for third in the 2021 Augusta National Women’s Amateur in August and earned a runner-up finish in the LPGA Symetra Tour’s Carlisle Arizona Women’s Golf Classic in March.

Zhang, who has spent 47 straight weeks as the No. 1 player in the world, will compete at the 2021 AIG Women’s Open and is a two-time winner of the Rolex Tournament of Champions, won the 2020 Rolex Girls Junior Championship and the 2020 Ping Invitational, and is a two-time AJGA Player of the Year.

“On behalf of our entire organization, I’d like to congratulate Rose on this incredible achievement,” said John Bodenhamer, USGA senior managing director, Championships. “Her play over the last two years has put her in a league of her own, and she has shown she is not only a champion on the course, but off it as well. We cannot wait to continue to watch her career grow for years to come.”

The USGA and the R&A co-award the McCormack Medal annually. It is named after Mark H. McCormack, who founded sports marketing company IMG and was a great supporter of amateur golf.