Zalatoris, Day Share Lead Heading to Final Round of Farmers at Torrey Pines 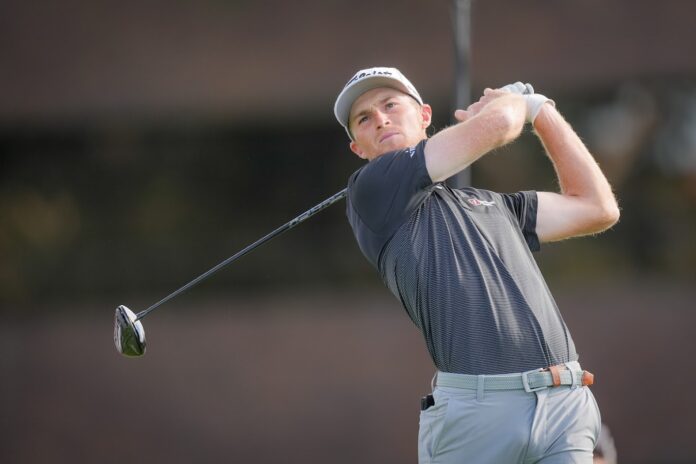 Will Zalatoris earned the 2021 PGA Tour Rookie of the Year Award and hasn’t let up.

The 25-year-old Zalatoris (pictured) carded a bogey-free, 7-under-par 65 on the South Course at Torrey Pines Golf Course in La Jolla and is tied for the lead with Jason Day of Australia heading to the final round of the Farmers Insurance Open.

This is the 70th edition of the tournament, which started out as the San Diego Open in 1952, when Ted Kroll was the winner. Tiger Woods has won the title record seven times, the last in 2013.

“I drove the ball better today than I have at any time in my career,” said Zalatoris, who put on 15 pounds of muscle during the off-season. “I’ve added about 20 yards off the tee, so that work has really paid off.

“It really helps on this golf course if you can hit the fairway and give yourself opportunities. I was born in (San Francisco) California and really feel comfortable playing here, and just love this golf course.

“It’s great to be on top of the leaderboard, but there is a lot of golf left to be played and I am really looking forward to tomorrow.”

Zalatoris, who has yet to win on the PGA Tour but has nine finishes in the top 10 and 17 in the top 25 in the last two seasons, holed out from 39 yards for an eagle on the second hole and added five birdies to record a 54-hole score of 14-under 202, but could be farther ahead but he missed several short putts.

“I won the World Juniors here back in the day and have won this tournament twice, so I feel very comfortable here,” said Day, who has claimed 12 of his 27 pro victories on the PGA Tour, but has not won since the 2018 Wells Fargo Championship.

“I just remained patient throughout the day, my stroke felt really good, and I made some really good putts. It was nice to finish the day with three birdies on the trot. I’m not satisfied and I’m going to do some more work today.

“It’s been a long time since I’ve played this well and I just hope to keep it going tomorrow and hold that trophy again.”

Top-ranked Jon Rahm, who won the U.S. Open last year at Torrey Pines and also won this tournament in 2015 and 2017, was tied for the lead starting the third round but could manage only a 72 and is one stroke back in a tie for third with Aaron Rai of England, who birdied the last two holes for a 68.

Sixth-ranked Justin Thomas, also tied for the lead after two rounds, made two late bogeys in a 73 and is two shots behind in a tie for fifth with Cameron Tringale of Laguna Nigel, who had a 72, and Sungjae Im of South Korea, who posted a bogey-free 68.

Maverick McNealy of Portola Valley and Stanford made a hole in one on the eighth hole from 165 yards and shot 67 and is three down in a tie for eighth with Billy Horschel and Ryan Palmer, who both finished at 69, and Si Woo Kim of South Korea, who birdied the last hole for a 70.

Fourth-ranked Dustin Johnson is tied for 13th after a 69, seventh-ranked Xander Schauffele, the Olympic Gold Medalist from La Jolla and San Diego State, had five birdies on his back nine in another 69 and is tied for 33rd, and defending champion Patrick Reed birdied the last hole and is tied for 38th.