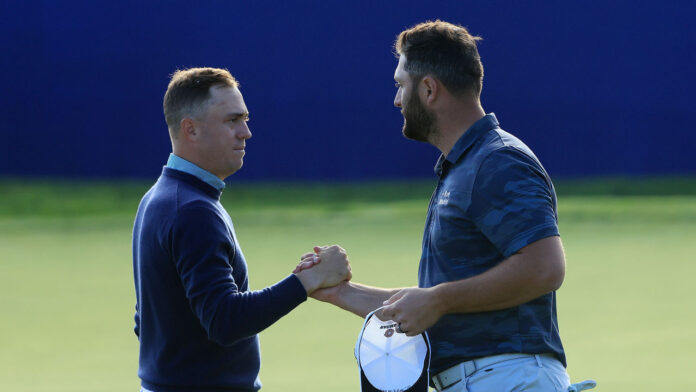 Top-ranked Jon Rahm of Spain is on top of the leaderboard again at Torrey Pines, but he has company.

Rahm, who has won twice at Torrey Pines, shot 7-under-par 65 on the North Course and is tied for the lead with sixth-ranked Justin Thomas and Adam Schenk midway through the 70th edition what is now the Farmers Insurance.

The first two rounds of the tournament that started out as the San Diego Open in 1952 was played on both courses at Torrey Pines, but the last two rounds will be contested on the more difficult South Course.

“It was not bad, but I scored better than I played,” said Rahm (pictured right with Thomas), who won the 2021 U.S. Open on the South Course and also captured this tournament for the first of his six PGA Tour victories in 2017. “I missed six fairways in a row at one point and got a little frustrated, but was able to make some good saves and had only one bogey.

“Even though I missed the fairways on several holes, I was able to hit the greens and give myself some good chances to make birdies and pars. I was able to just keep going and it worked out all right.

“But we play the South Course the rest of the way and you can’t afford to make mistakes there, so I hope to play the way I did on the first day.”

Rahm, who finished second in the Sentry Tournament of Champions to start the new year, started on the back nine and carded five birdies before his only bogey at No. 18, and then added three straight birdies through No. 8 on the front nine to record at 36-hole total of 13-under 131.

Thomas, who has 14 PGA Tour victories, carded five birdies on the back nine and four more on the front while posting a bogey-free 63 alongside Rahm, while Schenk collected eight straight birdies through No. 11, also on the North Course, in a 62.

“I lost track of how many I made in a row, but there were a lot of low scores on the North Course yesterday and I knew there was a lot of get-table holes and I needed to keep going if I wanted to get up on top of the leaderboard and hopefully stay there throughout the weekend,” said Schenk, who has two victories on lower tours but has never won on the PGA Tour.

“I knew I had to try to keep the pedal down and not get satisfied with how many birdies I made. Just a lot of long putts. It’s not like I was hitting it to 10 feet every time making the putts. I had a lot of lengthy ones. I had done it before, obviously not on the PGA Tour on this stage. I just lost track and knew I had some par 5s coming up and wanted to take advantage of them.”

Said Thomas, who has won 14 times on the PGA Tour including the 2017 PGA Championship and the 2021 Players Championship: “I played well, I drove it well, something you’ve got to do out here on the North Course.

“I mean, both courses, but if you drive it well, you’ve got a lot of wedges, a lot of short holes, four par-5s. I made some nice putts when I needed to, just kind of some of those short mid-rangers and it was a solid day.”

Cameron Tringale of Laguna Nigel eagled the fifth hole and was tied for the lead until making his only bogey when he lipped out a par putt on the last hole of the North Course in a 65 and is one stroke back in fourth, followed by Peter Malnati, who birdied four of his last seven holes in a 66 on the North and is two shots behind.

Third-ranked Dustin Johnson shot 69 on the North Course and is in a tie for 17th that includes Will Zalatoris, the 2021, PGA Tour Rookie of the Year, who closed with an eagle on the ninth on the North for a 68.

Defending champion Patrick Reed closed with four birdies in five holes for a 66 on the North and is tied for 23rd, while seventh-ranked Xanders Schauffele of La Jolla and San Diego State, the Olympic Gold Medalist, is tied for 50th after a 72 on the South.

Ninth-ranked Bryson DeChambeau, dealing with left wrist and back injuries, finished at 70-72—142 and missed the cut by one stroke, while local favorite Phil Mickelson, who won this tournament twice, wound up at 76-71—147 to miss the weekend by six shots.