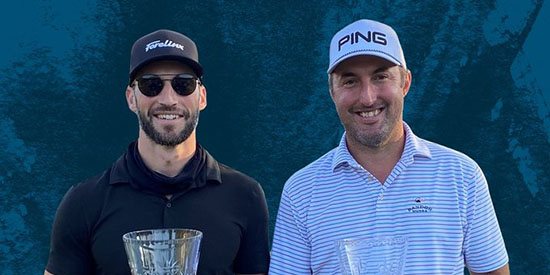 Licursi and Wax posted a score of 63-65—128, 14-under-par, and overcame a bgey on the final hole of regulation, while first-round leaders Anderson and Sauer finished at 62-66—128. Wax also won the title in 2015 with Bowen Osborn of Los Angeles.

Lincoln Melcher and Jin Nakao of Burbank carded a score of 66-64—130 to tie for third with Ryder Epson and Hunter Epson of Long Beach, who finished at 64-66—130, while Justin Vrzich of El Cajon and Daniel Kim of Chula Vista shot 65-66—131 to tie for fifth with Jonathan Minkoff of Los Angeles and Ryan Wilkins of San Diego, who wound up at 63-68—131.

Defending champions Corby Segal of Santa Clarita and Stephen Hale of Bakersfield, who won in a three-hole playoff last year, were seventh at 66-66—132, followed by Andrew Ricci of La Canada Flintridge and Joshua Granger of Monrovia at 67-66—133.

Segal won the title with Tim Hogarth of Northridge two years ago.

Mark Miller of West Covina and Dan Sullivan of Pasadena shot 66-68—134 to tie for ninth with Satchel Hermann of Los Angeles and Eric Lindquist of Toluca Lake, who finished at 65-69—134.