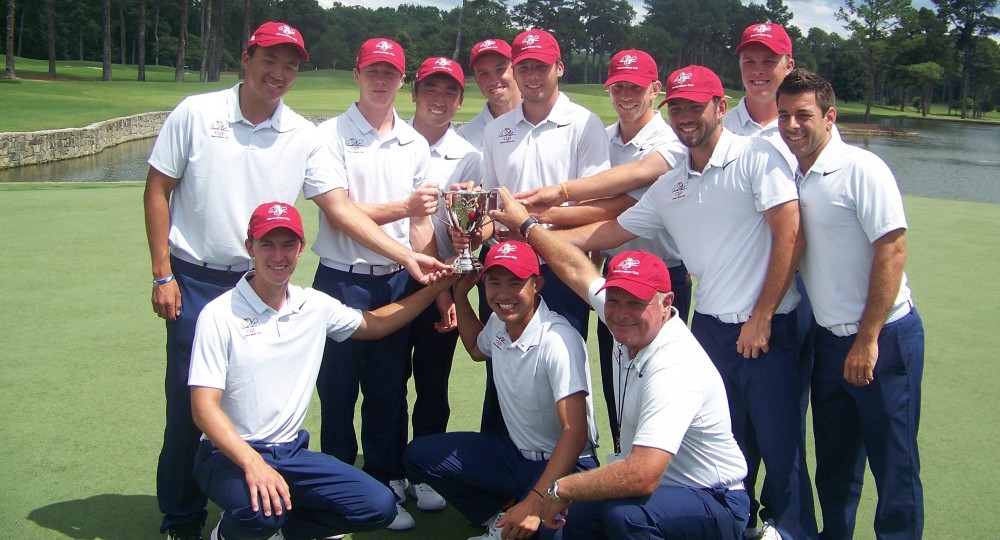 Doug Ghim of Texas went 4-0 and Maverick McNealy of Stanford was 3-0-1 as the United States won nine of the 10 singles matches on the last day to trounce Europe, 19 1/2 to 10 1/2 in the 21st Arnold Palmer Cup at Atlanta Athletic Club in Johns Creek, Ga.

Ghim became the 19th player to win all four of his matches in the event.

The home team in the event matching the best college players from the U.S. and Europe won the event for the seventh consecutive year and the U.S. leads the series, 11-9-1.

McNealy trounced Rory Franssen of Scotland and Missouri, 8 and 7, while Doug Ghim defeated Stuart Grehan of Ireland and Maynooth University, 2 and 1.

Nick Hardy of Illinois finished at 2-1-1 by beating Harry Ellis of England and Florida State, 3 and 2, and Norman Xiong of Oregon posted the same record by routing Harry Hall of England and UNLV, 8 and 7.

The U.S. team was coached by John Fields of Texas, assisted by and Andrew Dibitetto of North Carolina, and the rest of the team included Collin Morikawa of California, Sean Crocker of USC, John Coultas of Florida Southern, Sam Burns of LSU, Jimmy Stanger of Virginia and Chandler Phillips of Texas A&M.

McNealy and David Wicks of Europe and Jacksonville U. earned the Michael Carter Award, given to the player on each team who best represent the ideals of sportsmanship, integrity and upholding the game.

Morikawa, a junior at Cal, was selected by players on both squads as winner of the special exemption into the PGA Tour’s 2018 Arnold Palmer Invitational at Bay Hill Club and Lodge in Orlando, Fla.

Morikawa’s selection was based on the golfer who best represents Palmer’s values.

“It was an incredible and memorable experience that I’ll never forget,” said Morikawa, who posted a 2-2 record. “Representing the USA is always an honor, and to come out with the win on home soil is always a good feeling.

“It’s also an honor that my team voted me to represent Mr. Palmer and be a participant in the Arnold Palmer Invitational. I look forward to the opportunity and couldn’t be more excited about it.”

Starting next year for the matches at Evian Golf Resort in Evian, France, the competition will match players from the U.S. against an Internationals team of college players, with each team having 12 male and 12 female golfers.

Share
Facebook
Twitter
Pinterest
WhatsApp
Previous article
Erin Hills plays host to 117th U.S. Open
Next article
The Philosophy of Golf: How Aristotle Can Help Lower Your Score and Transform How You Perform on the Course