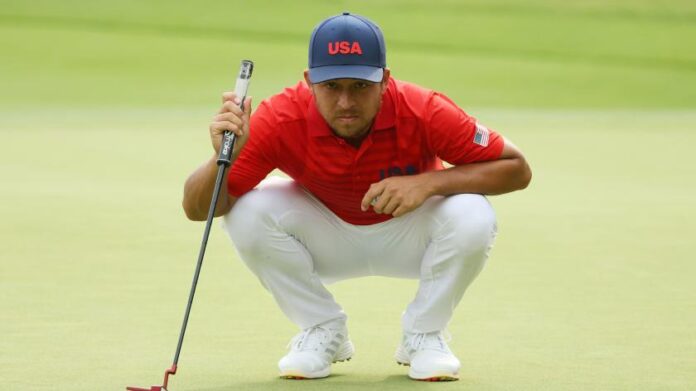 Xander Schauffele of the United States beat the horn and everybody on the course.

Schauffele sank a six-foot birdie putt to cap a 9-under-par 63 moments before play was halted for the second and final time because of thunderstorms in the area and he took a one-stroke lead over Carlos Ortiz of Mexico midway through the 2020-21 Olympic Games Golf Tournament on the East Course at Kasumigaseki Country Club in Saitama, Japan.

There was a delay of more than two hours for the second straight day earlier, and 16 players were still on the course when play was stopped and they return in the morning to finish round two.

“It was nice to get done there,” said Schauffele, whose 63 tied the Olympics record set by Matt Kuchar of the U.S. in 2016 at Rio de Janeiro and tied by Sepp Straka of Austria in the first round in Japan. “We had that two-hour delay earlier and it’s not often you have two in one round,

“I’ve been playing really solid and made some good putts, especially those eagles. With the humidity and the thunderstorms around here, I don’t think the course is going to firm up, so I just want to keep hitting the fairways so I can continue to be aggressive in going for the pins.

“ … But I am happy to be finished, so I don’t have to come back early tomorrow.”

The fifth-ranked Schauffele, from La Jolla and San Diego State, rolled in birdies on the short, par-4 sixth hole and a 40-footer at No. 14 before birdies on the last three holes to finish 36 holes at 11-under 131.

Ortiz, whose only PGA Tour victory came in the 2020 Vivint Houston Open after he claimed three victories in 2014 on what is now the Korn Ferry Tour, also made an eagle at No. 6 and added four birdies in a 67.

“It was good to finish with a nice par save on the last hole that will make things taste better,” said Ortiz, who opened with a 71 and was on top of the leaderboard most of the day two after playing the first six holes in 4-under. “I just want to continue playing good golf for the next two days.

Mito Pereira of Chile made another eagle at No. 6, added six birdies in a 65 and is two shots behind in a tie for third with Straka, who rallied with three late birdies for a 71, Alex Noren of Sweden, who had a bogey-free 67, and Masters champion Hideki Matsuyama of Japan, who was 6-under for the day through 16 holes when the end came.

Rory McIlroy of Ireland, ranked 13th, eagled the eighth hole in a 66 and is three down in a tie for seventh with Shane Lowry, also of Ireland, who kick-started his 65 with four birdies on the first eight holes, Jazz Janewattananond of Thailand, who had a 71, and Paul Casey who was 6-under for the day with three birdies in four holes through 17 holes when the horn sounded.

Third-ranked Collin Morikawa of the U.S. shot 70 and was in a tie for 25th that included his U.S. teammate, 12th-ranked Patrick Reed, who finished at 71, while fourth-ranked Justin Thomas of the U.S. was 1-under for the day through 17 and in a tie for 39th when play was halted.