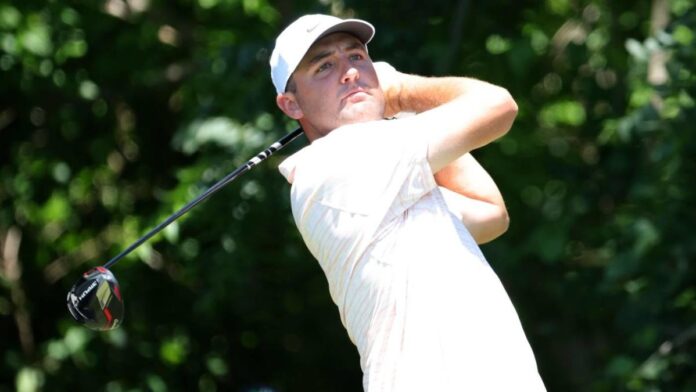 No. 1-ranked Scottie Scheffler obviously enjoys being at the top.

The 25-year-old Scheffler (pictured), who has won four times this season, played bogey-free for the second straight day and shot 5-under-par 65 to tie Beau Hossler of Rancho Santa Margarita and Scott Stallings midway through the 75th Charles Schwab Challenge at Colonial Country Club in Fort Worth, Texas.

“This golf course is all about good approach play and at first it didn’t really fit my eye,” said Scheffler, who also was tied for the first-round lead after missing the cut in the PGA Championship last week at Southern Hills Country Club in Tulsa, Okla. “But I’ve been working on that and it’s really paid off this week.

“It definitely was a good reset last week. I didn’t do anything on Saturday and hit a few balls on Sunday, so it was a nice break coming into this week. I’m playing really good golf and looking forward to the weekend.

“It’s supposed to be windy and I like it better when things are more difficult rather than easy.”

Scheffler, who claimed his first major victory at the Masters in April, birdied the first two holes in round two and added three birdies on the back nine to finish 36 holes at 9-under 131.

Hossler, who played college golf at Texas and is seeking his first victory as a pro, also posted a bogey-free 65, while Stallings, who has won three times on the PGA Tour but not since the 2014 Farmers Insurance Open, carded the low round of the day with a bogey-free 64.

“Today felt, frankly, never really stress-free, but as stress-free as it’s going to get,” said Hossler, who won the Southern California Amateur in 2013 and 2014. “It felt like I was in play. I never was that out of position. Yesterday I was kind of grinding more.

“To be honest, from my perspective, the harder the golf course plays, I think it favors me. I’ve never been a player who thrives on shooting 30-under par in a tournament. Hopefully, it plays difficult (on the weekend), and smart strategy and good commitment and good execution is what will come out on top.”

Said Stallings, who sank an 18-foot birdie putt on the 18th hole: “I felt good on the greens, felt good with my stroke. Made a lot of birdies. My caddie has done an unbelievable job of reading greens all week.”

Patrick Reed, who has won nine times on the PGA Tour but missed the cut five times this season, had a second straight 66 and is one stroke back in solo fourth, while Pat Perez of San Diego also shot 66 and is three shots behind in a tie for fifth with Chris Kirk, who finished at 67.

Seventh-ranked Viktor Hovland of Norway recorded a bogey-free 65 and is one more down in a tie for seventh with Max McGreevy, who shot 66, Davis Riley, who had a second 67, and Harold Varner III and Cam Davis of Australia, who both came in at 68.

Ninth-ranked Jordan Spieth, who won this tournament in 2016, is tied for 12th after a bogey-free 66, 10th-ranked Sam Burns shot 68 and is tied for 40th, defending champion Jason Kokrak is tied for 51st after 71, and fourth-ranked Collin Morikawa of La Canada Flintridge and  Cal made the cut on the number in a tie for 62nd following another 71.

Fifth-ranked Justin Thomas, who won the PGA Championship for the second time last week, made a triple-bogey 7 on the ninth hole en route to a 71 and missed the cut by two strokes.