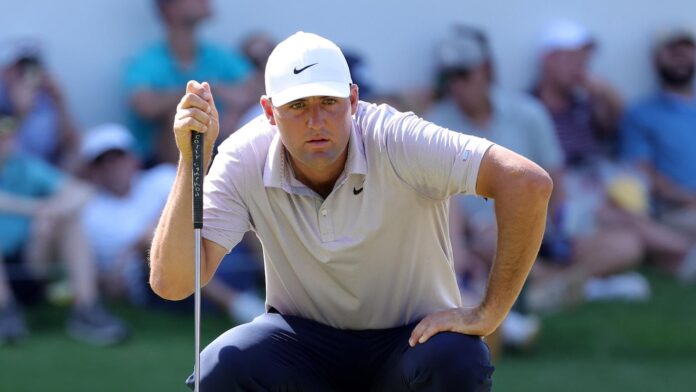 Scheffler (pictured) sank a 31-foot birdie putt on the final hole to cap a 2-under-par 68 and take a two-stroke lead over Brendon Todd and Scott Stallings to the final round of the 75th Charles Schwab Challenge in windy conditions at Colonial Country Club in Fort Worth, Texas.

“I was just trying to make sure I got it to the hole because putting downhill when the greens kind of get iffy late in the day is very tough, so it’s much easier when you’re on the other side of the hole putting up,” said Scheffler, who was coming off his first bogey of the tournament at No. 17. “Fortunately that one hit the bottom of the cup.

“I hit (the putt on No. 17) a little bit too firm. I struggled a little bit with the speed of the greens today. It’s tough when the wind gets blowing that hard. I mean, I was playing good golf, but it was really tough out there. The winds were up really high.

“The greens were actually pretty firm, and so it was challenging. The birdies were not coming easy to anybody out there late in the day.”

Scheffler, who has won four times this season including the Masters but missed the cut last week in the PGA Championship, started the day with nine straight pars, but made birdies at Nos. 10 and 11 to get his round rolling. He has led virtually all the way since opening with a 66.

Todd, who has won three times on the PGA Tour, tapped in for an eagle on the first hole and added three birdies on the front nine before closing with 10 consecutive pars for a bogey-free 65, while Stallings was 3-over before making three birdies on the last seven holes for a 70.

“Really it’s just kind of about, not necessarily hanging on, but just making sure you continue to play smart golf and don’t go out there and try and birdie every hole and maybe shoot yourself in the foot by playing too aggressive,” said Todd, who followed two 68s with the low score of the third round.

“I did a good job of managing the wind and the golf course and scrambled pretty well there on the back nine.”

Said Stallings: “I managed pretty well all day. Just kept the ball in front of me. I hit a really nice pitch on No. 7, kind of one of those awkward putts, like a four-footer up the hill with the wind blowing straight across. Kind of the exact same thing on No. 8. … Misjudged my pitch on 10 and next thing you know you’re 3-over-par … but I bounced back,”

Harold Varner III posted a bogey-free 68 and is three strokes back in solo fourth, while John Huh  of Los Angeles and Cal State Northridge sank a five-foot eagle putt on the first hole to kick-start a 68 and is four shots behind in a tie for fifth with Cam Davis of Australia, who had two bogeys on each nine in a 69, Chris Kirk, who rallied with two birdies on the back nine for a 70, and Patrick Reed, who had two birdies and three bogeys in a 71.

Mito Pereira of Chile birdied three of the last five holes for a 68 and is one more down in a tie for ninth with Davis Riley, who birdied the first two holes on his way to a 70, and Beau Hossler of Rancho Santa Margarita, who didn’t have a birdie in his 73.

Ninth-ranked Jordan Spieth is tied for 12th after a 70, 10th-ranked Sam Burns birdied the first three holes and shot 67 to tie for 16th, seventh-ranked Viktor Hovland of Norway made a double-bogey on the first hole and two late bogeys while totaling 73 and is tied for 24th, and fourth-ranked Collin Morikawa of La Canada Flintridge and Cal made a late birdie to finish at 70 and is tied for 50th.

Defending champion Jason Kokrak stumbled to a 76 with a double-bogey 6 on the fifth hole and six bogeys on the back nine while sinking to 69th and dead last.