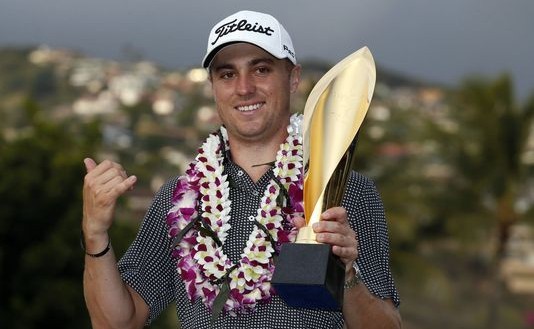 Justin Thomas wrote his name in the record book, by himself in two instances, and alongside the likes of Tiger Woods, Johnny Miller and Ernie Els in others.

The 23-year-old Thomas completed a virtually wire-to-wire victory at the Sony Open in Hawaii, posting a 5-under-par 65 to win by seven strokes over Justin Rose of England at Waialae Country Club in Honolulu, Oahu, Hawaii.

Thomas, who took the lead in the FedExCup standings and will rise to No. 8 in the World Golf Rankings this week, also won the SBS Tournament of Champions a week at Kapalua on Maui and repeated in the CIMB Classic in Malaysia in November.

“It was really hard (starting the final round with a seven-stroke lead); I was very nervous this morning,” said Thomas, who won for the third time in his last four starts and claimed his fourth PGA Tour victory. “A lot of things were going through my mind. I was making pars and one bogey early, but that par save at No. 6 was huge.

“But I was very comfortable on the last 10 holes. I knew I needed a birdie on one of the last two holes to get (the PGA Tour scoring record). It was an unforgettable week. It was unforgettable.”

Thomas was 1-over through eight holes before making his first two birdies on the last two holes of the front nine. Then he added four birdies on the back, including a tap-in birdie on the 18th hole to finish at 27-under 253.

That broke by one stroke the PGA Tour’s 72-hole record of 254 set by Tommy Armour III in the 2003 Valero Texas Open. It also shattered the Sony Open record of 256 set by Russell Henley in 2013.

Jamie Lovemark of Rancho Santa Fe and USC shot 65 that included eagles on the ninth and 18th holes to wind up nine back in a tie for fourth with Kevin Kisner, who followed his 60 in round three with a bogey-free 65.

Gary Woodland birdied the last hole for a 67 that left him 10 strokes behind in a tie for seventh with Zach Johnson, the 2009 Sony Open champion, who finished with a 68.

Chez Reavie started at No. 10 and played the back nine in 7-under 28, including a hole in one from 197 yards on the 17th hole and finished with a 61 that put him 11 back in a tie for eighth with Charles Howell III, who made six birdies on the last 12 holes to card a 65.