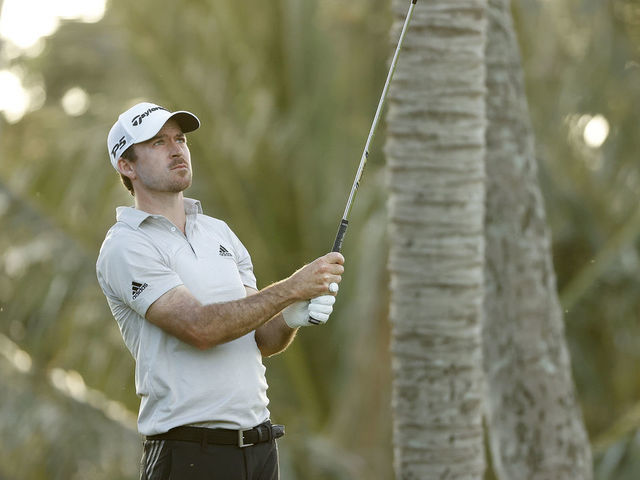 Nick Taylor of Canada carried the Olympic Torch before the 2010 Winter Games in Vancouver, and he also carried the day in round two of the Sony Open in Hawaii.

“I was fortunate to make a birdie on my last hole after hitting my drive against the fence,” said Taylor, whose two victories on the PGA Tour came in the 2014 Sanderson Farms Championship and the 2020 AT&T Pebble Beach Pro-Am. “It was a nice finish and I have putted well the first two days.

“I struggled a little on the first five holes today, but there are a lot of birdies out there when the conditions are calm like this. If the conditions are the same, I have to keep making as many birdies as I can on the weekend. You just have to put yourself in position off the tee and you have a chance to make birdies.”

Taylor started on the 10th hole and sank a 67-foot eagle chip on No. 18 in addition to making seven birdies while recording a 36-hole score of 12-under 128.

Cink, who ended an 11-year victory drought by winning to Safeway Open to start the new season, carded a bogey-free 63, while the eighth-ranked Simpson birdied his last three holes for a second straight 65, Henley finished at 64, Kirk also had a second 65 and Taylor totaled 66.

“This was a dream day here at Waialae,” said Cink, who beat Tom Watson in a playoff to win the 2009 Open Championship at Turnberry. “There was almost no wind out there, so you could dial in your number and hit your shots, instead of having to do the usual, which is figure out how wind is going to help or hurt the ball.

“It’s nice when you feel freed up like I was today, it’s nice to hit it close and make some birdies, including some putts of about 25 feet and wind up playing a round like I had today.”

Simpson, who has won seven times on the PGA Tour including the 2012 U.S. Open at the Olympic Club in San Francisco and the 2020 RBC Heritage, birdied his last three holes for a second straight 65.

“Today, I was not quite as sharp as yesterday,” said Simpson, who finished third at Waialae last year. “But I birdied my last two holes yesterday and the last three today to stay near the lead.

“I’m happy with my finish both days and knowing I will at least be close to the lead going to Saturday. The greens are so good right now and it’s nice to see a lot of putts going in. You don’t have to force it, and if you hit the ball in the right place, you’re going to make some.”

Fifth-ranked Collin Morikawa of La Canada Flintridge and Cal, the reigning PGA champion, made three birdies on each nine in a 65 and is three shots back in a tie for sixth with Charley Hoffman of Poway (65), Brendan Steele of Idyllwild and UC Riverside (65), Billy Horschel (66), Hideki Matsuyama of Japan (65), Marc Leishmann of Australia (65), and first-round co-leaders Joaquin Niemann of Chile (69) and Peter Malnati (69).

Defending champion Cameron Smith holed out for eagle from 19 feet on the ninth hole and is tied for 19th after a 66.