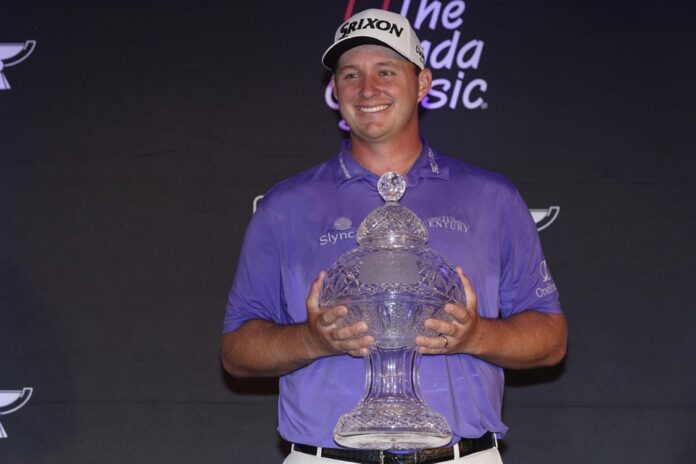 Sepp Straka didn’t hold the outright lead until he tapped in for bogey in the rain on the final hole.

The 28-year-old Straka became the first player from Austria to win on the PGA Tour, closing with a 4-under-par 66 to capture the 50th Honda Classic by one stroke over Shane Lowry of Ireland on the Champion Course at PGA National Golf Club in Palm Beach Gardens, Fla.

“Even though I didn’t play very well yesterday and just hung in there, I knew I could win today despite being five shots behind because this is a tough golf course and anything can happen,” said Straka, whose only other pro victory came in the 2018 KC Golf Classic on the Korn Ferry Tour. “I was just glad I could two-putt (from 48 feet) for birdie on the last hole.

“I made some birdies coming in to win and it’s great to have my family and friends here to celebrate with.”

Straka, who played college golf at Georgia, birdied three of the last five holes to pass Lowry after third-round leader Daniel Berger faltered early, and the Austrian finished with a score of 10-under 270.

Lowry, who won the 2019 Open Championship at Royal Portrush, didn’t make a bogey in his third straight 67, but finished with five straight pars and missed a 43-foot birdie putt on the last hole that would have forced a playoff.

“I thought I played well enough to win, but just came up short and that’s the way this game goes,” said Lowry, who has won five times as a pro, including the 2015 WGC Bridgestone Invitational at Firestone Country Club in Akron, Ohio. “This is a tough one to take.

“The bad weather hit right when we were on the 18th tee, but again, that’s just the way it goes. I played some of the best golf of my career this week on a tough course and it was fun to take the lead and hold in much of the final round.

“It’s just very disappointing not to win and it will bother me for the next 24 hours or so, but I’ll get over it and move on. It’s just hard to win out there.”

Kurt Kitayama of Chico, who led after the first round, birdied two of the last four holes to cap a 68 and was two shots back in solo third, while Daniel Berger, who took a five-stroke lead to the final round struggled to a 73 and was one more down in fourth.

Said Berger, who played the first six holes in 4-over to lose the lead: “I actually felt good today and hit the ball well, but I just didn’t feel comfortable with the putter and didn’t make any putts. I did a good job for three days but didn’t have what it takes today and that can happen at any time. That’s the way golf goes. But if I could have made some putts, I could have had a chance to win.”

Gary Woodland, the 2019 U.S. Open champion, shot 67 and wound up six behind in a tie for fifth with Alex Noren of Sweden, who birdied the last hole for a 68, while Matthias Schwab of Austria had a bogey-free 68 and was seven strokes back in a tie for seventh with Chris Kirk, who fell back with a 73.

Keith Mitchell birdied the last hole for a 68 and was eight shots down in a tie for ninth with Brian Stuard (69), John Huh of Los Angeles and Cal State Northridge (70), Lee Hodges (70), Sam Ryder (70) and Adam Svensson of Canada (73).