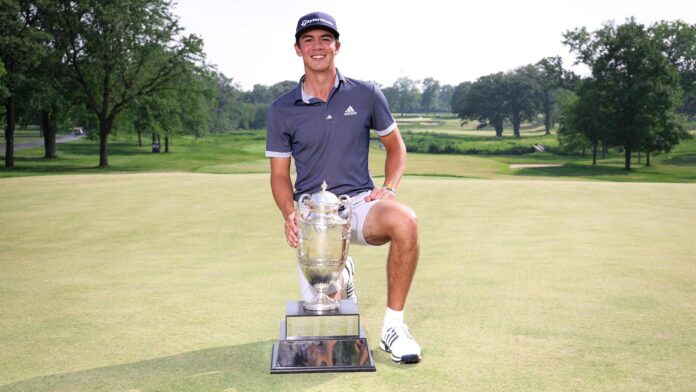 Michael Thorbjornsen, a sophomore at Stanford, captured the 119th Western Amateur by defeating Gordon Sargent, of Birmingham, Ala., 4 and 3, in the match-play final at Glen View Club in Golf, Ill.

The 19-year-old Thorbjornsen, from Wellesley, Mass., became the first stroke-play medalist to win the tournament since Norman Xiong in 2017, shooting a course-record 62 earlier in the week to earn the top seed for match play.

“I was not aware of the select company I’m in now,” said Thorbjornsen, who took charge against Sargent with three straight birdies through the 13th hole to go 4-up with five holes remaining in the championship match.

“I could kind of feel the momentum switch. But I had to remind myself that I was still leading. That birdie on 11 switched the momentum back in my favor.”

Thorbjornsen, who also won the 113th Massachusetts Amateur Championship earlier in July, earned invitations into the 2021 U.S. Amateur at Oakmont Country Club in Oakmont, Pa., next week, and the 2022 Evans Scholars Invitational on the Korn Ferry Tour.

In the semifinals, Thorbjornsen was 1 down to Austin Greaser of Vadalia, Ohio, before winning three of the last four holes to claim a 2-up victory, while Sargent, who will be a freshman at Vanderbilt, upset defending champion Pierceson Coody of Plano, Texas, 1 up.

“There’s nothing negative I will take away from this week,” Sargent, 18, said. “So many positives. This is the best amateur field and to be able to compete against these players gives me a lot of confidence.”