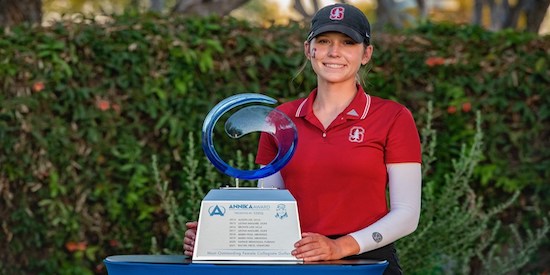 Rachel Heck of Stanford, who on Monday captured the NCAA Division I Women’s Golf Individual Championship, has been named winner of the 2021 ANNIKA Award as the best player in women’s college golf.

Heck, a freshman from Memphis, Tenn., beat out two other finalists, Linn Grant of Arizona State and Pauline Roussin-Bouchard of South Carolina for the award.

“It is unreal,” said Heck, who broke the NCAA women’s single-season scoring average record this season with a mark of 69.72, beating the 69.76 set by Lauren Stephenson of Alabama in 2018. “I remember in high school the ANNIKA Award Instagram page followed me and I was freaking out. I thought it was the coolest thing in the whole world. Every year I would see the watch list come out and see all of the girls I always looked up to, and thought that maybe one day I would crack the watch list. To actually receive the award is unbelievable, I am speechless right now.

“My biggest role model in golf is Annika (Sorenstam). She is incredible. What she did with her career in golf alone speaks for itself, but what she has done after that is unbelievable. She has given so much back to the game, she has spent the rest of her life just giving back to the game, growing golf and growing girls golf, so to receive the award from her is so special.”

Heck won the last five tournaments of her freshman season, capped by the Pacific 12 Conference Championship, the NCAA Stanford Regional title and the NCAA crown, and had a Stanford record six victories in nine events this year. In her other three events, Heck tied for second, tying for sixth and tying for 11th.

In addition, Heck tied for third in the Augusta National Women’s Amateur.

By winning the Annika Award, Heck earned a spot in the 2021 Women’s U.S. Open on June 3-6 at the Olympic Club in San Francisco, where she shot 5-under-par 66 to win the U.S. Open Collegiate Invitational in May.

The ANNIKA Award presented by Stifel, is given annually to the top female U.S. college golfer, as voted on by players, coaches and members of the golf media.