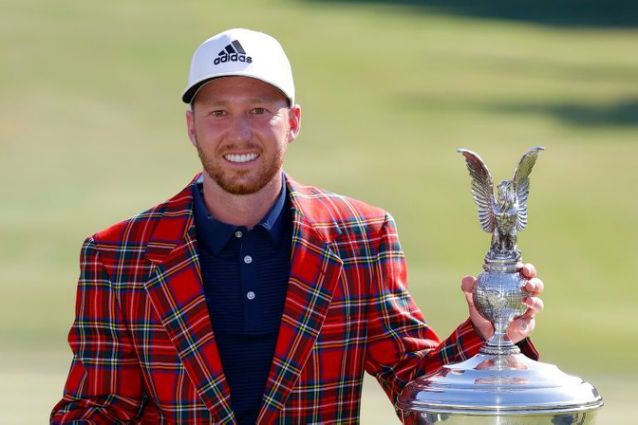 Last year after a three-month hiatus because of the Coronavirus pandemic, the PGA Tour restarted with the Charles Schwab Challenge, which will celebrate its 75th Anniversary this week at historic Colonial Country Club in Fort Worth, Texas.

The tournament that started out as the Colonial National Invitational, was first played in 1946 at Colonial, which is the longest continuous host of a PGA Tour event.

And Daniel Berger (pictured) made for a memorable comeback event in 2020 when he closed with a birdie to shoot 4-under-par 66, and then claimed the third victory of his career by making par on the first playoff hole, where Collin Morikawa’s 3½-foot par putt to prolong he playoff lipped out.

Berger will try to join legendary Ben Hogan, who is memorialized by a statue at Colonial, as the only players to win in back-to-back years there, having done it in 1946-47 and again in 1952-53.

Colonial is one of two courses known as “Hogan’s Alley,” the other being Riviera Country Club in Pacific Palisades on the outskirts of Los Angeles, where he won three times in less than 18 months, including the 1948 U.S. Open.

“I’m not the biggest golf history guy,” said Berger, who claimed his fourth PGA Tour victory earlier this year AT&T Pebble Beach Pro-Am. “But I saw the wall every time I teed off and I’m smart enough to know if you’ve won a tournament associated with Ben Hogan, you’ve done something pretty special.

“When you looked at the leaderboard Sunday, you knew it was going to be a shootout. I just needed a couple of birdies to stay in the mix. I made a big birdie on 15 and when I got to 18, I told myself I needed just one more. I just relaxed and poured it in.

“I left Colonial, headed to Hilton Head and tried stayed to stay safe. I always said if I won another PGA Tour event, we were going to Vegas to celebrate, but I guess that will have to wait. … I never got a chance to really celebrate.”

Annika Sorenstam of Sweden also made a bit of history at Colonial in 2003 when she became the first woman in 58 years to play in a PGA Tour event. Fans were gathering around the 10th tee an hour before the world’s top-ranked woman hit her first shot.

Also playing are second-ranked Justin Thomas, fifth-ranked Morikawa, who went on to win the 2020 PGA Championship and the 2021 WGC-Workday Championship, and eighth-ranked Patrick Reed.

“I going to fly home first, but then I’m going to Colonial,” the 50-year-old Mickelson said after he became the oldest major champion in history by winning the 103rd PGA Championship at Kiawah Island, S.C., on Sunday.

Even though it’s the week after the PGA Championship, they’re all at Colonial to pay homage to Hogan, and every one would love nothing more to put his name on the trophy alongside “Bantam Ben’s,” even if it’s already there.