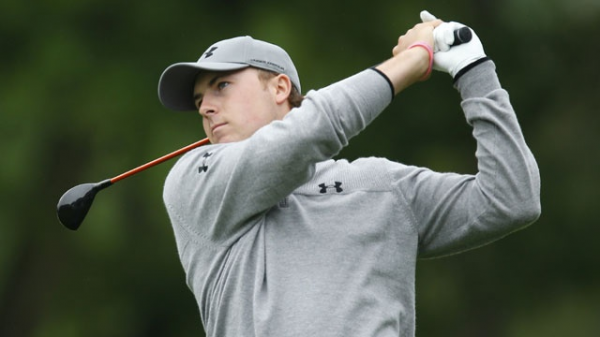 Jordan Spieth holed an unlikely 20-foot birdie putt on his final hole to shoot 4-under-par 67 at Monterey Peninsula Country Club and tie Jimmy Walker for the 36-hole lead on a windy and rainy day in the AT&T Pebble Beach National Pro-Am.

Spieth, the 20-year-old who was the PGA Tour’s Rookie of the Year last season, recorded his second consecutive 67 in what was known as Crosby Weather when tournament founder Bing Crosby hosted the event for years on the Monterey Peninsula.

“It was normally a straight putt and Michael (Greller) and I, my caddie, are looking at each other saying, ‘Well, we’ve got to play this about a foot out to the right with the wind,'” said Spieth, whose only victory as a rookie came in the John Deere Classic. “And so I hit it a foot out. With about three feet to go, the wind just blew it right, just broke perfectly right into the hole.

” … Today was very difficult. We started out in the rain and wind, and we finished in rainier and windier.”

Walker, who leads the FedEx Cup point standings after victories in the Frys.com Open and the Sony Open in Hawaii, followed a bogey-free 6-under 66 at Pebble Beach with a flawless 2-under 69 at Spyglass Hill, considered the most difficult of the three courses.

Both leaders were 9-under, although Spieth was one shot better at 134, but it will even out after Walker plays par-71 Monterey Peninsula on Saturday.

Hunter Mahan was one-stroke back in third after his second 68, this one at Spyglass, followed another shot back by first-round leader Andrew Loupe, who had a 73 at Pebble Beach, while Richard H. Lee was one more stroke back in fifth after a 72 at Pebble.

Phil Mickelson, a four-time winner of the tournament, battled back from a double-bogey 7 on the second hole at Pebble, but made bogey on No. 18 to shoot 73 and was tied for 17th.

Graeme McDowell, who captured the 2010 U.S. Open at Pebble, played Monterey Peninsula and shot his second 71 to tie for 60th, and defending champion Brandt Snedeker posted a second 72, this one at Monterey Peninsula, and was tied for 96th.